Five Things the Royals Must do to Repeat 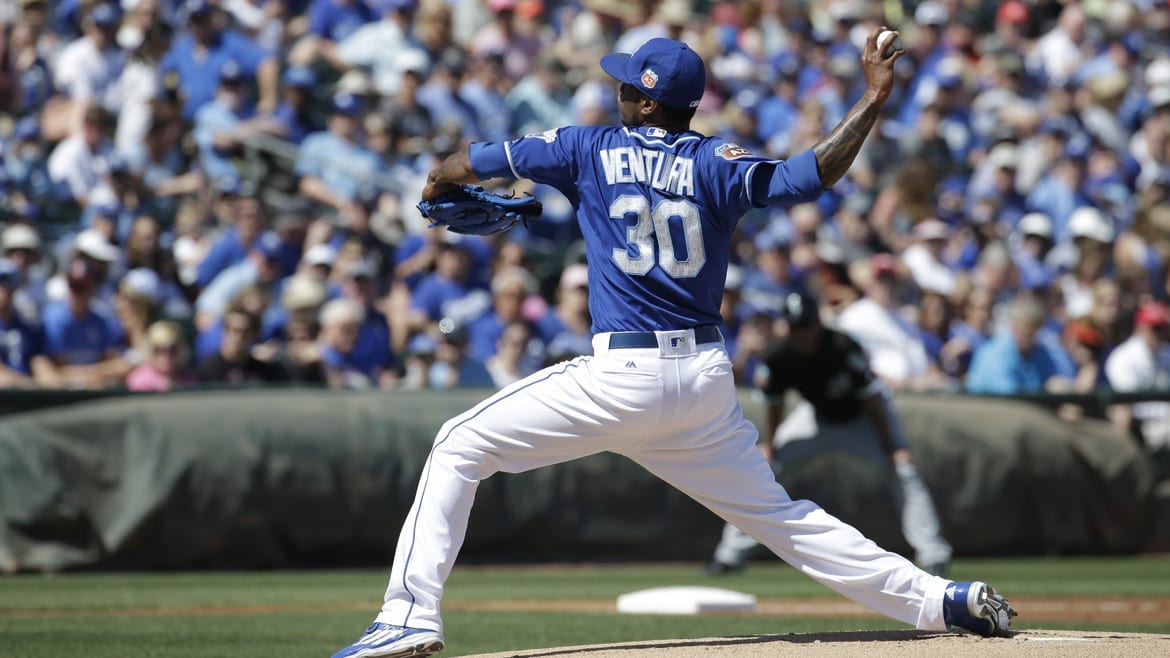 The Royals begin their World Series defense on Sunday night. Flatland has five things the team needs to do to repeat as champs.

Over these past two, pennant-winning seasons, the Royals bullpen has been ridiculously dominant. Historically so. Despite the loss of All-Star closer Greg Holland and free agent Ryan Madson, the pen could be even stronger this year. The team signed Joakim Soria. They got Luke Hochevar back at full strength, and plan to use lefty Danny Duffy out of the pen. Assuming that Kelvin Herrera and Wade Davis stay strong, the relief corps should again be the club’s most dangerous weapon.

Starting pitching, however, has been another story. Edinson Volquez, this year’s opening night starter, appears to be the only known entity. Beyond that, Kris Medlen has been mediocre. Chris Young has a strict innings count. Free agent signing Ian Kennedy – who got a huge, five-year, $70 million contract – has been far from dominant in the past, but should at least eat up innings.

The biggest pitching question mark, and the player with the biggest upside, is Yordano Ventura. There’s no more talented pitcher on the Royals, or for that matter, in baseball. When he’s on, Ventura is unhittable. But the 24-year old also thinks too much, has temper issues, and his mechanics off the mound make him look like a toreador. Ventura has all the physical tools to win a Cy Young, but he must get his mind right to earn that Ace Ventura nickname.

As for the fifth starter, who knows? It could be young right-hander Kyle Zimmer. He’ll start the season in Triple-A Omaha and await the call to KC. Or it could be Chien-Ming Wang, one of the bigger stories out of spring training.

Wang, as a Yankee in 2006, won 19 games and finished second in Cy Young balloting. But that was long ago. In 2015, Wang was let go by the Braves mid-season, and it hardly seemed like big news when the Royals invited the Taiwanese pitcher to camp this year. But Wang, with added velocity, posted a 2.08 ERA in 13 innings this spring, and now looks like a lock to make the big league club, either in the pen or maybe even a spot starter.

2016 was supposed to be Jarrod Dyson’s year. With Alex Rios gone, Dyson was finally going to start in right field. Then the 31-year old speedster strained an oblique muscle in Arizona. Enter fan favorite and journeyman Paulo Orlando. Then, in a shock, also enter Reymond Fuentes, the other breakout star of spring. Fuentes, a 25-year-old rookie and former first-round pick, has been absolutely destroying pitchers in Surprise. At one point he was hitting over .400. Expect an Orlando/Fuentes platoon until Dyson gets healthy. Watch closely, though. Fuentes could end up winning the right field spot outright.

Figure Out Second Base

Especially given the loss of Ben Zobrist in the off-season, the team must get some kind of offensive production from the spot. It’s possible, even with Omar Infante. In 2013, his final year with Detroit, Infante hit .318 with 10 homers. In 2014 with KC, Infante drove in a career-high 66 RBIs before being sidelined with injuries. (That is, assuming a baseball player can be sidelined and not “dugoutted.”) Last year, though, Infante played in just 124 games, hitting an anemic .220. Follow that with off-season elbow surgery, and Infante looked likely to lose his job to young Christian Colon.

Not so much. Colon started his Cactus League season by going 0-for-22. Clearly not one to eschew idolatry, he even used a Jobu statuette, modeled after the doll in the movie “Major League” to break his slump. The Royals will probably use both in a platoon at the position, and pray to Jobu that they can get on base.

Alex Gordon has to Stay Healthy

Okay, obviously everyone has to stay healthy. Duh. Lorenzo Cain played a 140 games last season, his career high, and was able to put up MVP-ish numbers because of it. But health is especially important for Gordon. A clubhouse leader and one of the team’s few bats with power, Gordon signed a big deal in the off-season, making him the team’s highest paid player. He’s also entering his tenth season as a big leaguer.

Despite their success over the last two seasons, two major statistical projection systems are down on the team for this year. Both the PECOTA and FanGraphs systems have projected the Royals to win 70-something games in 2016, good for last place in the AL Central. It’s astonishing, really. The Royals are the reigning World Series champions. They won the AL Central by 12 games. They are two-time defending AL pennant winners. Yet they’re consistently picked to finish last in their own division.

In 2015, coming off their bitter loss in Game 7 to the Giants, the Royals were on a mission. From the first pitch of the season, though the dog days and into October, last year’s Royals club was absolutely relentless. Now they’re all wearing rings. At least, they will be following the ring ceremony on Tuesday afternoon.

Conventional wisdom says that the team is due for a letdown, a World Series hangover, or at least a regression to the mean. But the conventional wisdom has pretty consistently been completely wrong in regards to this club. If these Royals players still want it bad enough, and if the breaks fall their way, there’s not a team in baseball that can stop them from defending the crown.