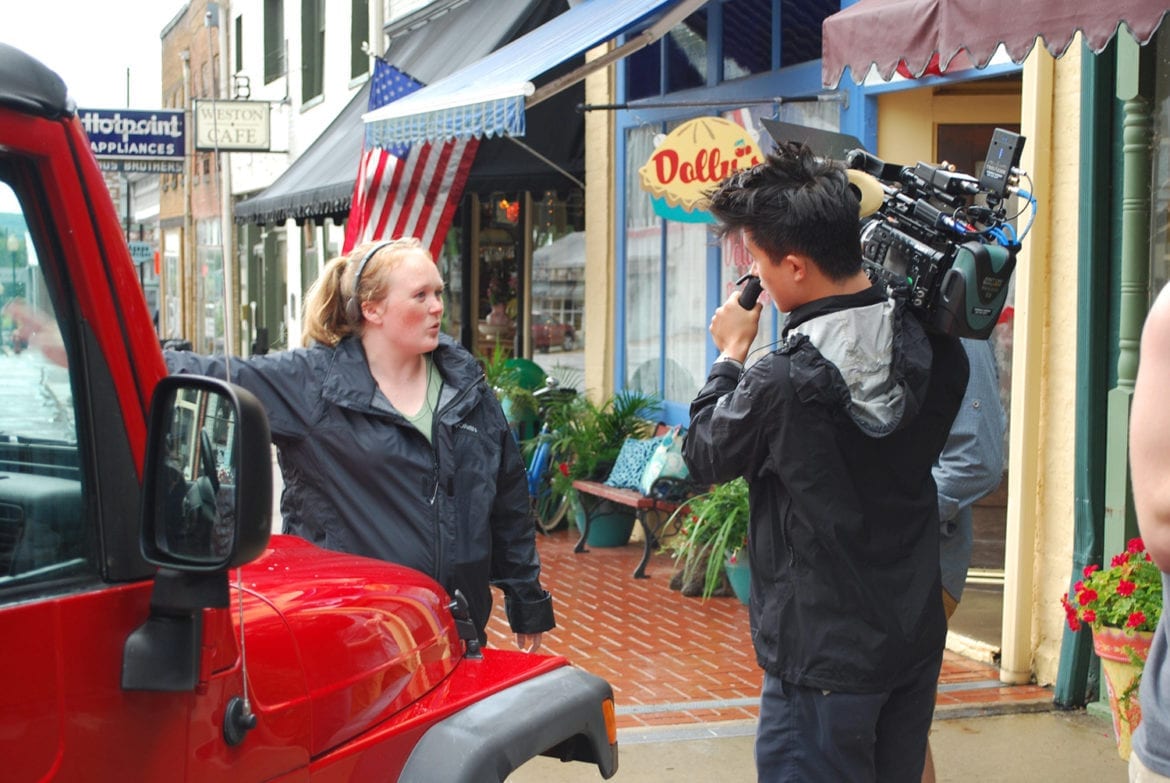 For years that’s been the dream of many in the local film community. It’s a vision of multiple big-league feature films that will lure stars and filmmakers away from Tinseltown and here to the City of Fountains.

But it’s probably not going to happen.

Because after more than a decade in the cinematic doldrums, KC is back in the production business in a modest, manageable, profitable and sustainable way.

Steph Scupham, head of the Kansas City Film Office, which came back to life in late 2014 after more than a decade in limbo, is placing her bets not on attracting one or two big-profile productions to town every year, but on a steady stream of TV shows, commercials, music videos, educational and industrial projects, and shorts that pump a steady stream of dollars — conservatively estimated at $120 million annually — into the local economy.

So far it’s working. And the effort has attracted a couple of independent features to our town. Two were shot here in August.

Different Flowers is a comedy/drama about a new bride who gets last-minute cold feet and runs off with her sister to get her act together on grandma’s farm.

Its writer/director is Morgan Dameron, a former Northland resident who has been the right-hand assistant to director J.J. Abrams of Star Wars fame. One of her cast members is comedy icon Shelley Long (Cheers), who also serves as a producer.

“I wrote the script to take place here,” Dameron said during a break in filming. “Having grown up here, I feel that Kansas City is a unique place. I see it as a character in and of itself.”

Things were a bit different with All Creatures Here Below, written by and starring Overland Park native David Dastmalchian. It’s a road trip flick about a Los Angeles couple on the run, and initially only a few scenes were to be shot here. 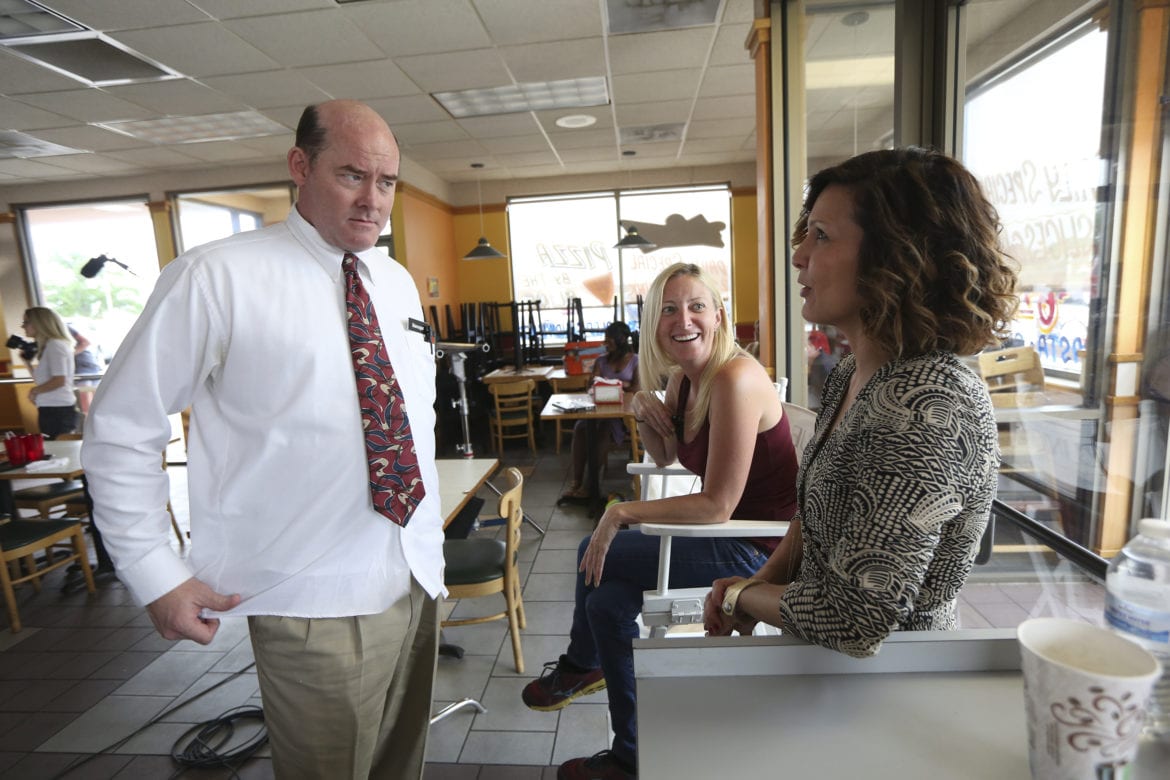 But Scupham pitched the idea that the region had so many never-filmed environments that the movie could recreate a cross-county trek using just Kansas City locations. In the end only a few scenes were shot in L.A. The bulk of the movie was made here.

Director Collin Schiffli said he was floored by the relative effortlessness of filming in Kansas City:

“Everyone’s helpful, everyone wants you to be here. And then the local talent . . . the cast and crew are jumping through hoops to help us out. It’s been amazing.”

For 12 years — from 2002 to 2014 — Kansas City was without a professionally staffed effort to run interference for production companies considering shooting here.

Back in the glory days of the 1990s the Kansas City Film Office was on a roll. Every couple of years a fairly big Hollywood or indie production came to town.

But then production slowed down. Mayor Emanuel Cleaver — a big supporter of the Film Office — was replaced by Kay Waldo Barnes, who was less intrigued by local film production.

With no big-profile movies being shot locally, some questioned the need for a film office.

As one councilman said of the city budget that eliminated funding for the Film Office, it’s hard to justify a city agency that caters to Hollywood when there’s not enough money to help pregnant teens and the mentally ill.

(Of course the whole idea was not so much to cater to Hollywood as to get Hollywood to spend money here . . . but by that time the effort to attract production had become a political football.)

With its city funding gone, the Film Office became a volunteer effort. Members of the Kansas City Film Commission — mostly individuals who work in film production —donated their own time to handle inquiries from out-of-town producers. But it was a hit-and-miss approach.

“There was a lot of work to do with none of the tools we needed,” recalled Heather Laird, a local casting director and long-time Film Commission member.

“We couldn’t hope to effectively do the marketing, and when a production company did come to town none of us had the time to really take care of them. It was a struggle just to maintain a bare-bones website.”

Things began looking up with the election of Sly James as mayor in 2011. James called for a task force on the arts, and the film community responded with a survey that showed the potential economic impact from TV, film and commercial production.

The emphasis of the new Film Office, said Councilman Scott Taylor, is on day-in-day-out production. Big feature movies get lots of publicity, he said, but a steady stream of smaller projects provides a more reliable economic impact.

The revived Film Office also benefits from changes in structure. It is no longer a municipal operation relying on the line item funding that makes it vulnerable every time a new city budget is debated.

Instead, the Film Office has been folded into Visit KC (formerly the Convention and Visitor’s Bureau), a non-profit funded in part by a stipend from the city.

“The Film Office is now an essential part of marketing the city,” Laird said. “It’s not just a little office answering the phone; it’s part of the bigger picture of selling the city, of showing that Kansas City is a vibrant and exciting place.”

This spring the City Council doubled down on film and TV production by approving financial incentives.

Many states offer tax credits to production companies that bring in jobs and spending, but Missouri’s film incentive ended in 2013 and has not been reinstated.

Now KC has a $75,000 film production rebate program — in fact it is the only municipality in the country to offer a local film incentive without a state-sponsored one.

According to Scupham it’s not so much the amount of the available rebates that matters as the fact that they exist at all.

“When we set up our booth at the annual AFCI Locations Show, the first thing we’re asked is ‘Do you offer incentives?’” Scupham says. “If you answer ‘No,’ that pretty much ends the conversation.

“The mere fact that we have one sends the message that we’re serious about attracting production.”

The crew of "All Creatures Here Below," a film written by and starring Overland Park native David Dastmalchian, assembled at the set during exterior filming in Kansas City. Many of the crew members were Kansas City hires. (Photo: Amy Greene via KC Studio)

At the heart of the effort is Scupham, who has earned raves for her enthusiasm, energy and insights.

“She’s just awesome,” said Laird. “From Day One Steph just ran with it. She’s exceeded everybody’s expectations and then some.”

Councilman Taylor agrees. “Steph has a great personality for working with the film industry. She knows what they need.”

Indeed, Scupham is a self-described “film geek” who has worked on a score of regionally-made films (including Kevin Willmott’s Sundance hit CSA: The Confederate States of America and Ang Lee’s Ride With the Devil). She’s been a talent agent, and has covered KU basketball and created the “comedy cooking show” Guided by Flavor for Sunflower Cable.

She says that Kansas City has numerous selling points attractive to film and TV production:

Filmmakers can work in Kansas City with minimal red tape and without having to obtain location permits. Of special importance: It’s relatively cheap/economical to film here.

In recent months there has been a flurry of inquiries about filming at KCI’s unoccupied Terminal A.

“It’s impossible to shoot curbside pickup scenes at most big airports,” Scupham says. “But at Terminal A it’s easy.”

KC even has special talents not found elsewhere.

“We had a production that needed trained roosters,” Scupham recalled. “So we found them a nearby animal wrangler who specializes in poultry.”