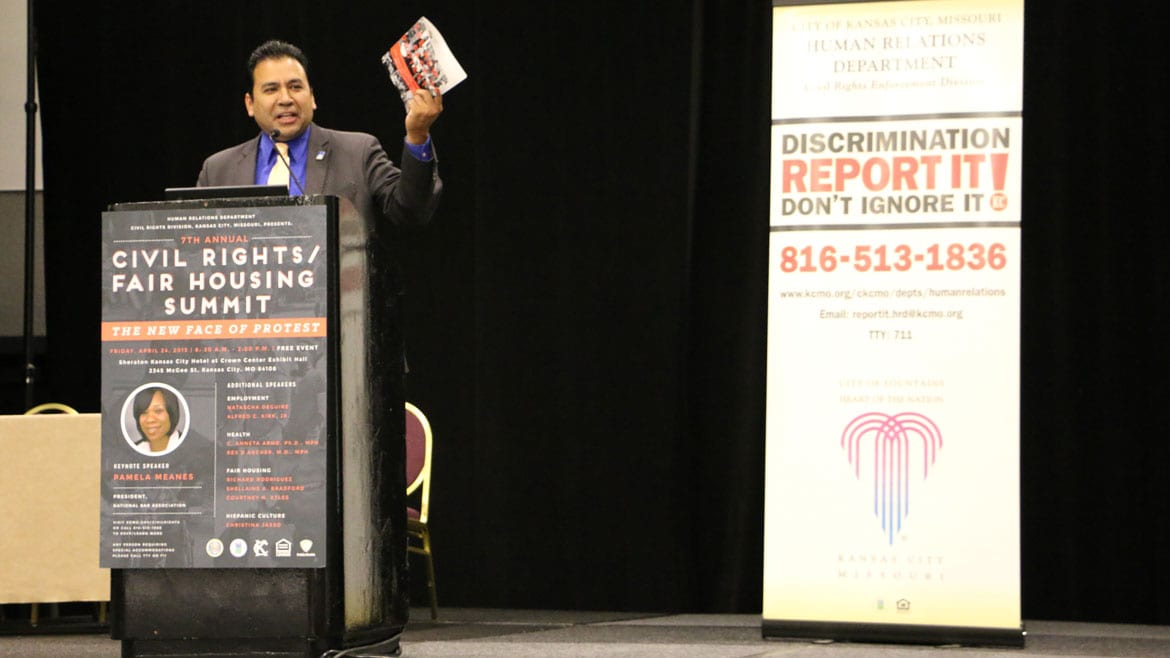 Carlos Gomez, president of the Hispanic Chamber of Commerce of Greater Kansas City, holds up the program from today's Civil Rights Summit. He applauded the city for printing the schedule in English and Spanish — the first instance of this he had seen in his eight years with the chamber. Photo by Caitlin Cress, Flatland.
Share this story

Since the death of Mike Brown in Ferguson, Missouri, last August, race relations in America have been a constant topic of conversation — on front porches, at bus stops, in bars and on cable news. And it was a big part of the agenda today at the 7th Annual Civil Rights and Fair Housing Summit, hosted by the civil rights division of KCMO’s department of human resources.

During introductory remarks, various Kansas City leaders said the day’s theme — “The New Face of Protest” — points to the incredible influx of protests following civil disobedience and riots in Ferguson.

“That was the moment that many young people were introduced to the realities of protest and civil disobedience,” she said. “It was a time that propelled civil rights activists from the past back into the spotlight and created a space for a new generation to express their views, demand action and experience the triumphs and heartaches associated with fighting for the good of the community.”

Topics for the day included breakout sessions on health care equity, fair housing rights and Hispanic immigrant relations. While these issues haven’t drawn the media attention and protest time that police brutality has, Gilmore said they are absolutely related.

“Times have changed. Issues have evolved. The need for diligent oversight is even more important today. Civil rights violations and housing discrimination may occur in more subtle ways, but still are as egregious as in the past,” she said.

“Sometimes you hear the comments from different people in the community that civil rights is no longer needed, but you turn on your television set and you see states across the United States passing limited voter rights initiatives, you see chaos in various municipalities regarding police brutality,” he said. “You see these things taking place, you see people being put out of housing projects and whole communities, people being dislocated from their families and friends. We see the importance of why (the civil rights division) is still in place.”

While the Civil Rights Summit exists to educate all Kansas Citians, those most at risk were unlikely to be present on a weekday morning, said Carlos Gomez, the president of the Hispanic Chamber of Commerce of Greater Kansas City.

“There’s a lot of people trying to make ends meet who can’t be here,” he said, “and they’re the ones we have to reach.”

Gomez’s comments piggybacked on those of the civil rights division’s manager, Thomas Randolph: He implored participants to attend sessions and gather pamphlets even if they didn’t think the information would apply directly to them. Think about those in your church, in your neighborhood, he said.

“It may not be about you, but it’s a learning experience for all of us,” he said.