Marc Wilson, the former director and CEO of the Nelson-Atkins Museum of Art, recalls a pivotal conversation that occurred at a meeting of museum supporters in the 1990s.

“We were completely out of space, and were setting out to build the Bloch Building,” Wilson said. “Morton Sosland turned to Don Hall Sr. and said, ‘It’s our turn, for our generation. It’s up to us to do this.’”

That brief exchange was emblematic of a generation that stepped up to the plate and gave generously to Kansas City area art venues and programs. Their efforts carved a lasting legacy for names such as Bloch, Sosland, Hall, Kemper, Kauffman, Nerman and Jedel.

It would be impossible to name all the families and individuals who played a role. Wilson venerates “unsung heroes, people you never heard of,” who left millions in their wills to fund art. The thread that bound them together was a “sense of duty to the community,” he said.

But now that several leaders from that generation have passed on, what of the future? Art venues face greater demands and require more resources. Will the heirs of the legendary art philanthropists carry on their legacy? Will new philanthropists emerge from a new set of families?

Supporters of the arts hope the answers to those questions are “yes” and “yes.” 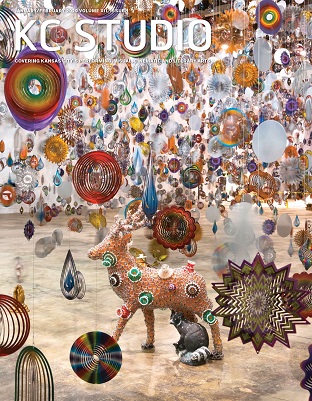 “It’s very important for it to continue,” said Robert Bloch, son of the late business titan and philanthropist Henry Bloch. “Culture is so important to the quality of life in Kansas City.”

But amid growing needs, leaders of area art institutions know they cannot be complacent about future funding.

“Institutions such as the Nelson must cultivate philanthropists who are not yet apparent, through outreach, programs, engagement,” said Julián Zugazagoitia, the current director and CEO of the Nelson-Atkins Museum of Art.

Kansas City’s legacy of major art philanthropy stretches back to the days of William Rockhill Nelson (1841-1915) and Mary McAfee Atkins (1836-1911), whose bequests led to the museum that bears their names.

Nelson was the co-founder of “The Kansas City Star” and a real estate developer. His mansion, Oak Hall, stood on the site now occupied by the museum.

“He wanted the city to be better,” Zugazagoitia said. “His vision launched the beautifying of Kansas City, and the neighborhood where we are today.”

Generally speaking, the lion’s share of philanthropy went to health, religious and educational institutions until the second half of the 20th century, Wilson said.

“That began to change in the ’60s,” he said. “America was getting wealthier, and we learned French cooking from Julia Child. It coincided with jet travel and Eisenhower’s interstate system and television.”

And at the same time, more Kansas Citians began to see the Nelson-Atkins Museum as an “exceptional gem,” Wilson said. “As a result, philanthropic dollars clustered around the Nelson.”

Many of those dollars came from philanthropists such as the late Henry Bloch, who co-founded H&R Block with his brother Richard in 1955. Thirty years later, Bloch founded the Nelson-Atkins Museum’s Business Council, one of the largest corporate museum membership programs in the United States. He chaired the board of the Nelson-Atkins Museum from 2004 to 2007.

The museum’s innovative, world-renowned Bloch Building, which opened in 2007, was named for Henry and his wife, Marion. Henry donated his personal collection to the museum, and an $11.7 million renovation was funded by the Marion and Henry Bloch Family Foundation.

The late Morton Sosland and his wife, Estelle, were among Nelson-Atkins Museum leaders who inspired the generosity of the Kansas City community 20 years ago in fundraising efforts that made the Generations Capital Campaign a great success. That success enabled the museum to bolster its endowment campaign and complete the Bloch Building and parking garage, as well as renovations to the original museum building.

The Soslands gave one of the nation’s finest private collections of American Indian art to the Nelson-Atkins Museum, and they were responsible for the 1994 gift of the museum’s iconic “Shuttlecocks.” Estelle Sosland served as the first female chair of the museum’s board of trustees.

Donald J. Hall Sr., the former CEO of Hallmark Cards, served as a trustee of the Nelson-Atkins Museum from 1980 to 2011. He chairs the board of the Hall Family Foundation, which provides extensive support for the museum. In 1986, the foundation donated 58 sculptures and maquettes by Henry Moore.

In 2005, Hallmark transferred its entire photographic collection of 6,500 works  to the Nelson-Atkins Museum. In 2017 the Hall Family Foundation made a special $10 million grant to broaden and deepen this collection.

In addition, the Hall Family Foundation commissioned the Nelson-Atkins Museum’s “Walking Wall” in honor of Morton and Estelle Sosland. The project by British sculptor Andy Goldsworthy fulfills the artist’s long-held vision to build a stone wall that moves across the landscape.

That generation “believed in the idea that if you were wealthy, you needed to support your community,” Wilson said. “You were given the opportunity to build a community.”

Robert Bloch said it’s not possible for him to do what his father did in terms of art philanthropy on a personal basis.

“Dad had so much money to invest in the arts personally,” Bloch said. “He had a passion for art. He collected his Impressionist paintings from 1975 to around 2000. He came to the conclusion that it should go to the Nelson-Atkins Museum. I’m very proud that the paintings are there now.”

But Bloch, the treasurer and director of the Marion and Henry Bloch Family Foundation, also feels passionate about art. He earned a degree in art history from the University of Missouri-Kansas City and worked part-time at the Nelson-Atkins print department in the 1980s.

Bloch loves collecting, and he periodically donates pieces to the Nelson-Atkins.

“Our (Bloch Family) foundation has given a few million dollars a year to the Nelson-Atkins Museum,” he said. “One day we hope to start acquiring works of art similar to what my dad bought.”

A separate foundation, the H&R Block Foundation, gives grants to improve access to the arts for all people.

Charlie Sosland, the son of Morton and Estelle Sosland, said his parents inspired him “to serve on the boards of the Kansas City Art Institute, the Nelson-Atkins Museum of Art and the Charlotte Street Foundation.”

In doing so, Sosland said, he has given “time, treasure and I hope a modicum of talent to further the mission of these three great institutions. The arts in our community are blossoming, and my generation and future generations need to step forward and follow in our parents’ footsteps, to make sure the arts continue to grow in Kansas City.”

Margaret Hall Silva is the niece of Donald Hall Sr. and the daughter of Barbara Hall Marshall, founder of the Kansas City Toy and Miniature Museum (now known as the National Museum of Toys and Miniatures).

Silva’s mother commissioned artists to make miniatures. “She would ask the artist, ‘What would you make if time and money were no obstacle? If you could make the thing you’ve always been dying to make, what would that be?’”

Silva earned a Bachelor of Fine Arts degree in sculpture at the Kansas City Art Institute (KCAI). In 1995 she founded Grand Arts, which provided artists with funding, housing, equipment and technical expertise.

“I’m very proud that we made a place where artists were comfortable enough to come and really experiment,” said Silva, who served on the KCAI board for about 20 years. “I told artists that I too wanted them to do something that maybe they couldn’t do or couldn’t show in their commercial gallery.”

Grand Arts closed in 2015, but Silva said several of the staff members moved to Los Angeles and launched Fathomers, a creative research institute. “They’re sort of the Grand Arts.2,” she said. “They’re getting some traction and making some waves and causing some trouble out there. I’m very proud of them.”

The art offerings of Kansas City and the surrounding region reached a whole new level with the 1994 opening of Kemper Museum of Contemporary Art, which was founded by the late R. Crosby Kemper Jr. and his wife Bebe Kemper (now Bebe Hunt).

The Kempers’ art legacy has been carried forward by their daughter, Mary Kemper Wolf, who chairs the museum’s board of trustees.

“Giving to the arts feels more necessary than ever,” Wolf said. “I think art has the ability to unify, ignite and transform communities. Art allows for public curiosity that can evolve into meaningful civic engagement.”

Support for the arts also inhabits the DNA of sculptor Linda Lighton, who earned a Bachelor of Fine Arts from KCAI. Lighton’s grandmother, Gertrude Lighton, was the first treasurer of Friends of Art at the Nelson-Atkins.

“She funded many works of art that went to the Nelson, and she started a gallery for women at 17th and Holly,” Lighton said. “She had print making and a tea room down there.”

Lighton supports institutions such as the Nelson-Atkins Museum and Kemper Museum of Contemporary Art. She founded the Lighton International Artists Exchange Program, which provides support for visual artists and arts professionals to travel to international residencies and artist communities, and for foreign visual artists to travel to and work in the United States.

“I’ve sent 176 artists to 52 or 53 countries and the Arctic Circle,” Lighton said. “To make great art, you have to understand what’s going on in other cultures. To make the best art, you have to be able to relate across borders.”

When asked about the needs for future art philanthropy, Wilson said it’s important to note that “there is virtually no public funding for the arts in Kansas City. Kansas City does not have the Rocky Mountains in Johnson County to appeal to people. We don’t have the Golden Gate Bridge over the Kaw. If we’re going to advance life in this city, it has to be done by the people of the city.”

David H. Hughes Jr., founder of the Charlotte Street Foundation, said “arts organizations need to get and stay more relevant to today, in terms of both their content and their outreach. Arts organizations need more young arts professionals in key leadership roles. This is the path to younger donors, and it’s key to making a difference in our fractured society.”

Wolf said she hopes the Kemper Museum board “will grow in number and diversity, and the community at large will take possession of THEIR contemporary art museum through increased involvement, making the experience of free art and education understood as a vital injection into our community and world.”

Zugazagoitia said the Kansas City art world receives strong support from the heirs of the great art funders and the foundations they established.

But he said funding needs at the Nelson-Atkins Museum have grown. “Just in the last 10 years we’ve almost doubled our attendance, and we’re close to 600,000 visitors per year. We’re free. If we were to divide our budget by the number of people we give free access to, we’re subsidizing each visit to the tune of $60 to $70.”

So, despite the support that flows from the current generations of local philanthropic families and related foundations, the Kansas City art world cannot rest easy.

“One should never assume that because the parents were philanthropic with a cause, the kids will be,” Zugazagoitia said. It’s important always to find newer people, newer voices, people who are coming of age, for philanthropy.”