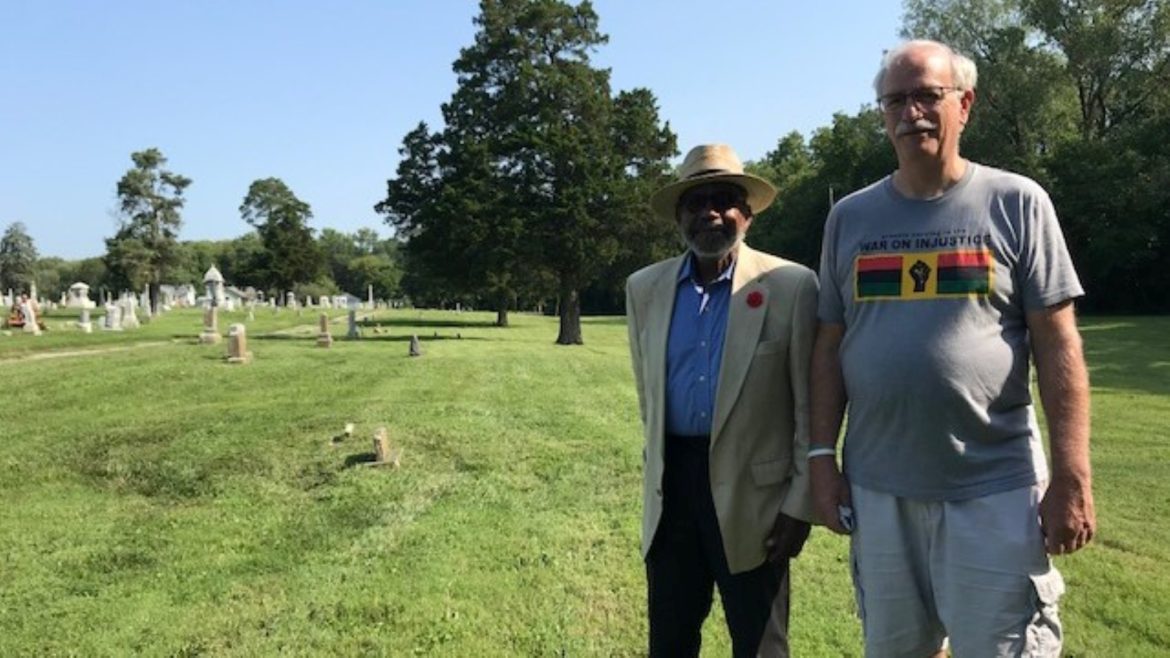 Shelton Ponder (left) and Harold Phillips, co-chairs of the Liberty African American Legacy Memorial project, stand in a formerly segregated portion of Fairview and New Hope Cemetery, where ground will be broken for the memorial on Saturday. (Brian Burnes | Flatland)
Share this story

On Saturday, Liberty will break ground on sacred ground.

The project, known as the Liberty African American Legacy Memorial, seeks to make permanent the names, and accessible the stories, of 758 people interred – most of them in unmarked graves – in the once-segregated section of what is now Fairview and New Hope Cemetery in Liberty.

The ceremony, to be attended by Liberty city officials and members of Clay County African American Legacy Inc., a community organization, begins at 9:30 a.m. Saturday at the cemetery at South Terrace Avenue and West Shrader Street.

What’s now a 30-acre cemetery was the community’s first burying ground, dating back to the 1850s. From the beginning, organizers believe, an approximately six-acre portion of it had been designated for people of color near the cemetery’s eastern boundary, on low ground.

A Saturday, Aug. 21, groundbreaking at Fairview and New Hope Cemetery in Liberty has been organized by Clay County African American Legacy Inc., established in 2000 and dedicated to researching and celebrating Liberty’s diverse history. Following Saturday’s groundbreaking ceremony, a parade will lead to Ruth Moore Park at 401 Grover St., where a Bicentennial Juneteenth Freedom Celebration will begin at 11 a.m. To learn more about the Liberty African American Legacy Memorial, go to libertylegacymemorial.org.

“It was the worst part of the cemetery, almost like a dumping site,” said Shelton Ponder, co-chair of the project.

Visitors can follow the easternmost of the several discreet roads through the cemetery. To the west are fields crowded with carved stones and tall monuments.

To the east, meanwhile, is a largely empty slope – blank but for the occasional weathered stone.

For years Harold Phillips, project co-chair, has led cemetery tours for students at nearby Franklin Elementary.

“Invariably, someone would ask, ‘So who is buried out there?’ ‘’ Phillips said.

Learning the correct answer to that is one reason for the project, said Cecelia Robinson, a retired William Jewell College professor who for years has been researching the Black families of Liberty, especially those with members interred at Fairview and New Hope.

“I wanted to know who these people were,” Robinson said.

“These people lived segregated lives and were buried in the segregated portion of the community’s cemetery. But these were resilient people who may have lived through slavery, or Reconstruction, or the Great Migration and the civil rights movement.

“These people are worthy of us knowing about.”

Anonymity on such a scale is due to several factors, organizers say.

While the cemetery opened before the Civil War, the earliest documented burials in its segregated section date only to the early 1880s, said Erin Martin, a project researcher.

“So there are about 30 years with an unknown number of burials,” Martin said.

Further, for the years between the 1880s and 1910, when Missouri first required deaths to be recorded, available documents remain elusive, Martin said.

“It’s safe to say that there are over 1,000 people out there, and that’s not counting the hundreds of infants who were stillborn or who didn’t make it to their first birthday,” she said.

The sale of private cemetery lots in the cemetery’s segregated section didn’t appear to begin until the late 1890s, Martin said. And while many lots likely were sold, little evidence of those family investments remain visible today. Not many Black families, Ponder said, had the means to install sturdy memorials.

“Some of it was lack of resources,” Ponder said.

For many, he said, cemetery memorials represented a luxury. The story of the cemetery’s “Aunt Kitty” stone attests to that.

The monument marks the grave of Katherine “Aunt Kitty” Alexander, who for 30 years after the Civil War served as a cook for William Jewell College residential students. She also lent the students money, or watched over them when they were ill.

More than once, those students later recalled, “Aunt Kitty” mentioned how much she would like her grave to be marked with a memorial. After her 1909 death, a William Jewell alumni group solicited funds for such a marker. Today that monument, placed there by “Her Boys,” stands in the old segregated section, and her story can be found on the Liberty African American Legacy Memorial website.

But her story was an exception, Ponder said.

Many times families likely only had the means to place small slabs of limestone or more makeshift wooden markers. Those likely surrendered to time.

Ponder remembers returning to Liberty in 1986, after being away for many years, and seeing the segregated section still studded with grave markers.

Today, 35 years later, many of those have vanished, Ponder said.

“There’s been the weather, and some vandalism,” he said.

The new memorial will be built to represent all the missing memorials.

When completed, the site will include 15 bollards, or small posts, to mark the perimeter of the approximately six-acre segregated section. A 175-foot walkway will lead to the memorial, where visitors will find on a large granite panel the names of the individuals whose burials there have been confirmed.

Organizers believe the memorial will represent minimal disturbance of any possible remains. A ground-penetrating radar survey in 2020, financed by the city of Liberty, proved inconclusive in revealing the precise location of specific graves, or groups of graves, said Tom Garland, the city’s assistant parks director.

The survey did, however, reveal the trace of a small road that once ran through the segregated section. That road, organizers believe, likely would not have been built over obvious grave sites.

That, then, will be where the new memorial will be placed.

The city felt the radar survey was an appropriate gesture, said Garland, who added that the segregation legacy of the cemetery, owned by Liberty since 1901, must be candidly addressed.

“There were mistakes made in the past,” Garland said. “The whole thought of telling somebody ‘You can’t have your family here…’

“We want to make sure those mistakes are rectified.”

Researchers, meanwhile, have confirmed the names of 758 persons buried at the cemetery. That work, begun in 2018, has been laborious and assisted by many.

Phillips received access to the burial records going back to the 1920s held by the Church–Arthur–Pasley Funeral Home of Liberty.

“Anytime I would find a name with a “Black, colored, Negro,” I would note it,” Phillips said.

Then those names would be researched further. Much information has been found at the Clay County Archives and Historical Library in Liberty, as well as online.

The Missouri Secretary of State website offers digital access to death certificates from 1910 through 1970. Project members also have used Ancestry, the online genealogical site, to seek will and probate records along with census records. They also have used Newspapers.com in search of an obituary or – even more unusual – an actual news story.

The life of Park Nelson, a formerly enslaved person who was brought to western Missouri before the Civil War and spent 50 years working a farm before dying at age 87, merited a one-paragraph notice in the St. Joseph News-Press in 1936.

The project has illuminated new details regarding Liberty’s slavery era. Its website has archived documents revealing the paperwork once generated by the county’s slave trade, a significant part of Clay County’s pre-Civil War economy.

One study has identified Clay County as one of seven Missouri counties in which enslaved persons, in 1850, represented at least 24% of its total population. In 1850, 49 Liberty residents owned 157 enslaved persons.

On Jan. 11, 1865, delegates at a Missouri constitutional convention in St. Louis approved emancipation of all enslaved persons.

Today the names being confirmed for the Liberty Legacy Memorial detail the rich complexity of the Black community that grew in Liberty following emancipation.

“There were restaurant owners and beauticians,” Martin said. “There were lots of teachers, principals and preachers. We have found a lot of day laborers, cooks and laundresses. There also were a lot of land-owning farmers.”

Organizers hope to dedicate the completed memorial during the community’s 2022 Juneteenth celebration that will also coincide with the bicentennial of Clay County’s 1822 organization.

The rewards of the Liberty African American Legacy Memorial project have been vivid for Phillips.

“As a white person I have eavesdropped on conversations that I would never have been part of normally,” Phillips said.

“This has been a community that for so long had just been ignored or marginalized, and so the pain in those stories and the phenomenal grace of those conversations – it has been just amazing to hear.

“Stories like that are just not part of my background at all. The Black community in Liberty was a community that so many of us knew nothing about.

“And now this collaborative effort is giving us this beautiful quilt – a tapestry – of that community.”

Flatland contributor Brian Burnes is a Kansas City area writer and author. He is serving as president of the Jackson County Historical Society.