The making of colorful canvases 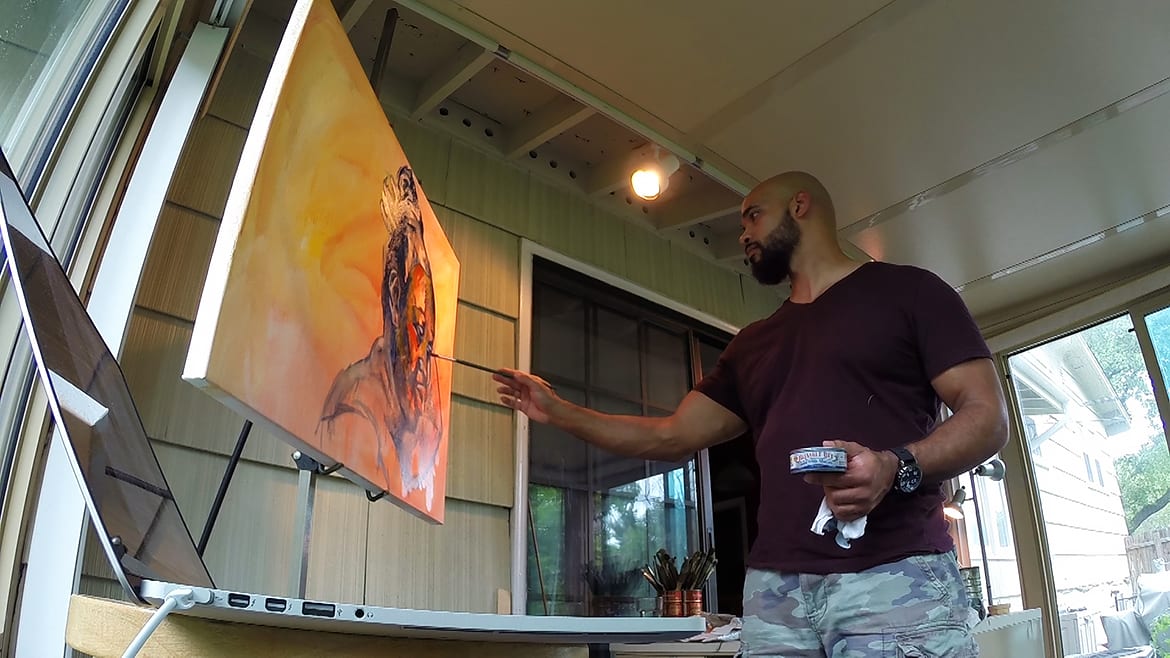 Kwanza Humphrey works on a new painting.
Share this story

Kwanza Humphrey is an emerging artist whose colorful canvases and insightful drawings have been featured in shows at the Kansas City Artist Coalition and the Albrecht-Kemper Museum of Art. Humphrey says he tries to tell a deeper story about the people he captures in his art — a story he believes we’ll all recognize.

On a recent warm Sunday afternoon, Humphrey was on his back porch working on a new painting in his home studio in Shawnee, Kan.

“I like to draw people, portraits, faces,” Humphrey said. “I’m just really drawn to people and different kinds of people from all walks of life. I’ve kind of wanted to get to know people and wanted to know their stories and what they are all about. What I try and capture is not just that person, but something that’s universal to humanity and to everyone.”

Working from a sketch, Humphrey said he enjoys the process of creation.

“I get something from being able to put what’s in my head and what I see in the world around me onto a piece of paper on canvas.”

Here are some of Humphrey’s thoughts on the artistic process, shared during an interview with KCPT’s Arts Upload team:

“I remember my first drawing in kindergarten at five,” Humphrey said. “You know how you lay your hand down on a piece of paper and you trace it, and it looks like a hand? I tried to do the same thing with this little car. So I laid it on its side and I traced it, and it’s not a flat thing like your hand so it’s not as easy to trace. I got done with the drawing and (it didn’t) look anything like I wanted. So I set it down, looked at it and started drawing it, and then from that point on I always have been looking at things and wanting to see something there. I try to interpret it through my eyes.”

The use of color, for impact

“One of my signatures is the way I use color,” Humphrey said. “I don’t mix a lot of colors on my palette. I like to use straight color and optically blend them on the canvas. I start with the black and white and get my composition and my values set up. I let the subject matter inform where I’m going to go with the colors.”

“A lot of times I’ll take two or three months where I’m not really painting. But the wheels are constantly turning and I’m soaking in ideas in my environment, subconsciously thinking about the next thing I’m going to do,” Humphrey said. “How it all starts is I see things that are just like, ‘Man, I really want to capture that.’ So, hopefully, I can capture that in a way that lets others experience that same feeling that I felt.”

Tom Deatherage, owner of The Late Show Gallery, sat sipping a cool drink in his Crossroads space on Cherry Street. “I met Kwanza two and a half years ago approximately,” Deatherage said. “I think he’s a good painter. He would show me his sketchbook and he would say, ‘What do you think of this and this and this?’ I was so charmed by his sketches, that’s why we decided to have the sketchbook show. I think he’s got a great way of covering a person’s personality. They are not exact drawings of people, but they capture the essence of the people. Some of them are strangers and some of them are people he knows. I think they are just charming.”

Striving to be ‘present and in the moment’

“There’s that mechanism that always seems to be on — that I’m always observing,” Humphrey said. “And a lot of times I think that’s who I am: being present in the moment and really capturing what’s there. Really that is what art is about for me, to be able to, not necessarily see what is in front of you, but beyond that initial layer and capture the emotion of what’s just below the surface. And I think when you see that far, you start creating things that connect with other people.”