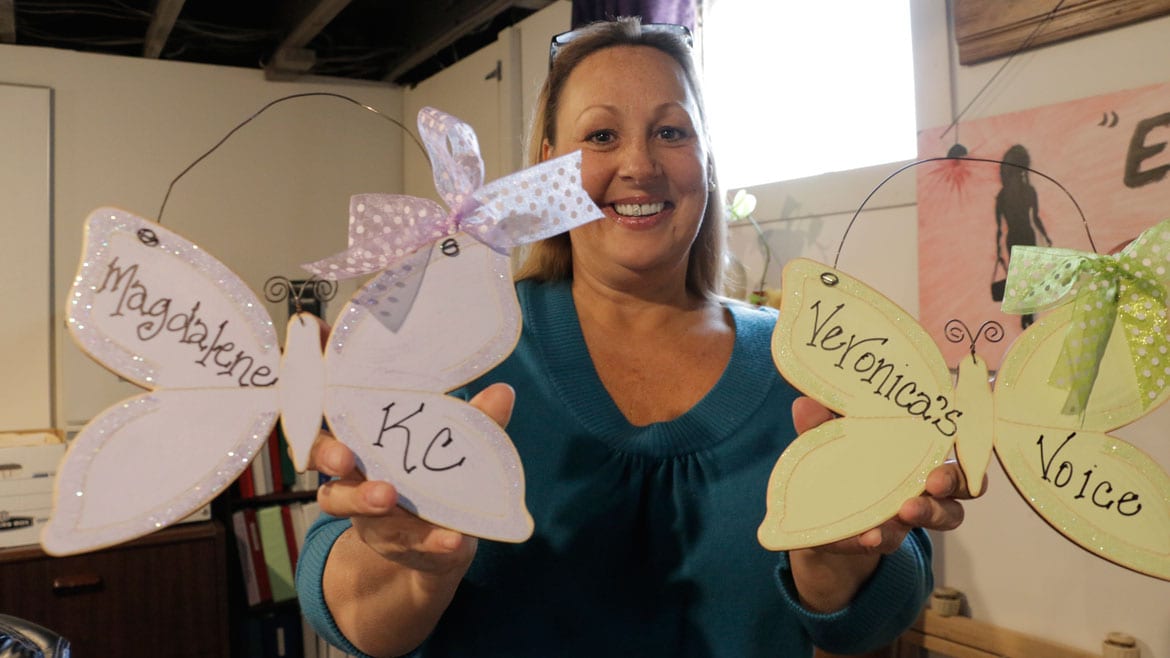 Kristy Childs is house hunting. She’s looking for the perfect house: a good-sized, family home with a living room big enough for a Christmas gathering and yard space for a garden.

The house isn’t for her, though. It’s for five women who need a place to rest, recuperate and educate themselves before entering the mainstream world from a life as victims of sex trafficking.

Childs is the founder of Veronica’s Voice, a Kansas City nonprofit focused on providing non-judgemental support for victims of sex trafficking. She is a survivor of sexual trafficking — her victimization began at age 12 — so she is uniquely qualified to provide the help that these women need.

Many women may decide they want to get out of “the life,” but lack the resources needed to make the change, Childs said.

It took Childs six years to fully step away from prostitution once she made the decision that she needed to get out.

“It was a process,” she said. “It didn’t happen overnight. I really wanted out, but I could find no way out.”

Childs credits divine intervention with her determination to escape prostitution. She became pregnant in the ‘90s and could not bring herself to abort the baby. She ended up in the emergency room when she thought she may be miscarrying.

She said God spoke to her in that ER, telling her that she should have the baby and that he would show her the way out of her current life.

“What didn’t happen is God didn’t just rain down a bunch of money in that emergency room and say, ‘Go forth and pay your bills,’” she said. “I still had to survive. I really prostituted myself out of prostitution.”

Childs made a step-by-step exit plan, using a process she now uses with the women that Veronica’s Voice serves: risk reduction.

“I got off the streets,” she said. “I worked one day a week. I went to school the rest of the time. It was all these different things that seemed so logical, but I couldn’t see them before. I was lowering my risk; I was working less; I was saving my money. I had goals. I had objectives.”

The Veronica’s Voice home, which will be called Magdalene KC, will give women access to necessary rehabilitation services, services Childs had to provide for herself during her six year self-extraction process.

Veronica’s Voice volunteer Bernie Darter said access to these services is crucial. Life skills, she said, include everything from budgeting to learning how to make friends.

The structure of Magdalene KC will be based on a successful model in Nashville, Tennessee: the Magdalene program. The Nashville program and its social enterprise initiative, Thistle Farms, were recently featured on the PBS documentary “A Path Appears.” They house 30 women in six homes. Childs said she had been wanting to open a home for recovering women in Kansas City, and her mission was only clarified when she and Darter visited the Tennessee program in fall 2013.

“I actually couldn’t breathe,” Childs said of first walking into one of the homes. “I lost my breath, and then all I could do was cry because what they’re doing is so beautiful.”

Thistle Farms is the social enterprise branch of Nashville’s Magdalene program. The women in the program make handmade soaps and other bath products, which sell in Nashville and online. Darter and Childs both said a Kansas City social enterprise program will be explored down the road.

While the Nashville and Kansas City programs share the name “Magdalene,” they are not affiliated. Childs said Magdalene is in reference to the Biblical figure Mary Magdalene. Darter said Mary Magdalene was a prostituted woman, but Jesus had mercy for her.

“‘Magdalene’ has a sense of the woman who has been redeemed and who is loved and accepted, (even though) society has not (accepted her),” Darter said.

Childs said she had chose the name Magdalene early on.

“Oh, she was a prostitute,” she said of the Biblical figure. “Oh, she wasn’t a prostitute. Oh, she was. Who cares? We’ve called her one for 2,000 years, and I want to honor her and all the women throughout history that have been misunderstood and misrepresented.”

From 2002–2014, Childs and Veronica’s Voice operated a Safe Center where women could come for everything from peer support to trauma groups run by specialists. The center also worked with local shelters to find temporary housing options, but those often only lasted 30 days. Childs said this wasn’t enough.

“We were making exit strategies for women there through the work we were doing, (but) they just didn’t have the housing support,” she said.

The Safe Center closed in March 2014, which Childs said was an incredibly difficult decision.

“It was an emotional time for me because I knew we were leaving a gap, but… we were putting Band-Aids on gaping wounds,” she said.

Around this time, Veronica’s Voice purchased a large home at 816 E. Armour Blvd. in midtown Kansas City, Missouri. They called it the Magdalene Manor. It would have housed 16 women.

After conflict with the city and the Hyde Park Neighborhood Association, Childs and the Veronica’s Voice executive board decided to sell Magdalene Manor. This was followed by a potential housing option at the vacant St. Paul School of Theology at Truman Road and Van Brunt Boulevard. This didn’t work out either.

Childs said community support is crucial to success for rehabilitation programs, but it’s difficult to come by.

“I feel that in this community, it has been difficult to get support, especially when people view trafficking victims this way and prostituted women in that way,” she said. “They’re seeing them as something different. My thing is, regardless if you view them as a prostituted person or a trafficked person, do they deserve to have options and to get help if they’re wanting to get out of that horrible situation?

“Call ‘em what you want to call ‘em,” she continued. “They’re human beings, too. They are somebody’s child, they are lost in a horrible world, a horrible existence. They are the most marginalized citizens in our city. Why are we not helping them?”

Veronica’s Voice has found some community support: a small core of dedicated volunteers.

Lucinda White is one of these volunteers, and she said opening a home as soon as possible is essential.

“The stuff that Veronica’s Voice has been doing in the past has been great, and it’s wonderful services,” she said. “(But) it’s kind of like a Band-Aid if you don’t offer women a long-term place to stay for a time that they can really recover and figure out a way to start over and heal from their traumas.” 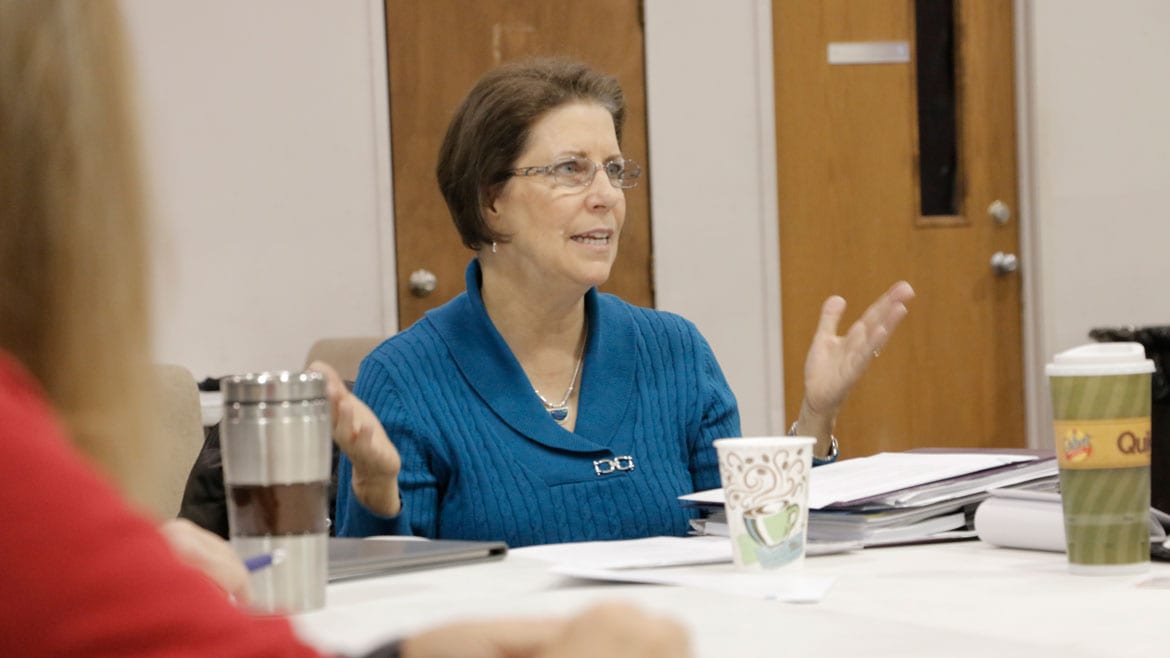 Magdalene KC will allow women to live in the home for two years. During this time, they need only be concerned with rehabilitation and education. The rest will be provided for them. Eventually, Childs would like to expand with more homes and even a transitional housing apartment building, where residents could pay a small rent while they continue to get on their feet.

Magdalene KC’s volunteer advisory board is currently working hard to locate a home by April or May of this year. This quick timeline will mean a lot of long hours, but Darter said it is worth it.

“I can’t stand to think of these women homeless,” she said. “They’re homeless, period, (on top of) everything else they’re going through. It’s just tremendous.”

Darter said she thinks this year may finally be the year for Magdalene KC.

“I think we have enough foundation now of the community to be able to really do it this year,” she said. “Have we gotten the groundswell (of support)? No. Have we gotten more than we had in the past few years? Yes.”

Childs said she and her executive board have five specific women in mind for the house. She said she’s excited to get them all under one roof.

“For most of us, we don’t have that (family) element,” she said. “To have that, and to really have people in our lives that are really there to lift us up and to walk with us on this journey is important. We have so many commonalities in our experiences that can bond us together.

The final episode of the PBS documentary “A Path Appears,” which explores gender-based violence and discrimination, airs tonight on KCPT at 9 p.m. “Violence and Solutions,” the portion that will air tonight, focuses on domestic violence both in the U.S. and abroad.

'A Path Appears: Breaking the Cycle of Poverty'

Join a live chat, with PBS and KCPT