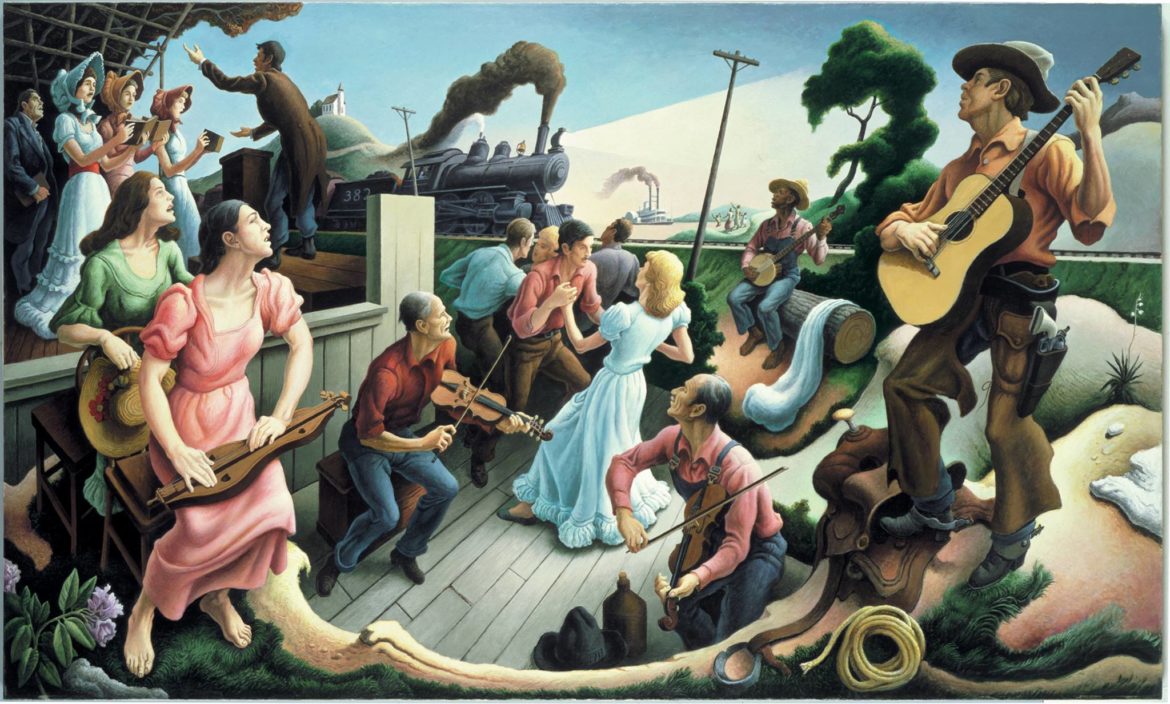 Kansas City is a jazz town — just ask anybody! So how did KC manage to be featured so prominently in Ken Burns’ new documentary on the history of country music?

Dayton Duncan, the longtime collaborator with Burns on “The Dust Bowl”, “The National Parks” and other PBS projects, has spent a lot of time in Kansas City. As for Burns, his work is steeped in Cowtown culture, from an early film about Thomas Hart Benton to his one-word epics, “Jazz” and “Baseball” (or as I call it, The Gospel of Baseball According to Buck).

“Country Music”, scheduled to premier locally Sunday on KCPT, is eight episodes long, and doesn’t hit an off-key note in the whole thing. But the Kansas City notes are especially sweet. While you’re watching, listen for them.

Within one minute I was yelling joyously at my TV, because Burns had chosen to open his film with musician Kathy Mattea telling the story about how she fell in love with a painting — “The Sources of Country Music”, painted in 1975 by Thomas Hart Benton.

As a 19-year-old tour guide at Nashville’s Country Music Hall of Fame and Museum, Mattea says she “hung out with this painting a lot,” and studied every inch.

Burns spends hours showing us how black and white musical cultures constantly overlapped and influenced each other, despite segregation and racist taboos against such mingling. Using the Benton painting to set up the film makes sense. In the mural, which now has a more prominent place in the museum than you see in the film, Benton shows a mostly white assemblage of gospel singers, dulcimer players, guitar pickers…and there in the back, isolated so that the eye goes right to him, is a single black banjo player.

“It’s just a beautiful thing to look at,” Mattea says of the Benton work. “It’s the closest thing visually to what country music sounds like.” If you don’t count the one he was working on when he died at his house in midtown KC, “The Sources of Country Music” was the last painting in Benton’s illustrious career.

Turn On Your Radio

No history of country music would be complete without discussing the role of radio. Surprisingly, Nashville’s WSM — broadcaster of country’s premier showcase, the Grand Ole Opry — was late to the scene. Other stations with huge signals reaching dozens of states were piping out Saturday-night barn dance programs and minting hillbilly music stars earlier. That includes KMBC’s Brush Creek Follies, mentioned prominently here.

But an even bigger radio influence got his start near Manhattan, in tiny Milford, Kansas. That was the headquarters of Dr. John Brinkley, who promised to cure male sexual underperformance with the surgical implementation of goat glands. Brinkley was an early adopter of radio to push his message to the masses, and to keep people entertained he brought in hillbilly musicians.

The federal government, appalled at his success in promoting a quack medical remedy, took away his radio license. Doc Brinkley simply relocated to Mexico, switched on a 500,000-watt “border blaster,” and resumed business. That radio signal brought the sounds of his in-house musical talent — June, Maybelle, and A.P. Carter, aka the Carter Family — into millions of homes that had never heard them before.

“If it weren’t for Dr. Brinkley,” says John Carter Cash, Johnny and June Carter Cash’s boy, “we wouldn’t know country music as we know it today.”

Elsewhere, I heard the opening notes to “Groovin’ High”, the bebop classic by Charlie Parker and Dizzy Gillespie that helped cement Bird’s reputation as a jazz innovator. What, pray tell, was it doing here?

Like Benton’s painting, it was here to make a point. Burns wanted to explain why Bill Monroe was more than just a perfectionistic mandolin picker and bandleader. So he drags Parker into the frame to explain how both men emerged from an existing musical form and created effectively an entirely new one — in Parker’s case bebop, in Monroe’s case bluegrass.

The Day The Music Died

As my colleague Brian Burnes writes, the last picture ever taken of country legend Patsy Cline was here in Kansas City. Cline, along with a slew of musical stars, played a benefit concert at KCK’s Memorial Hall in honor of “Cactus Jack” Call, a popular country DJ killed in a car accident.

Hawkshaw Hawkins, a rising talent and husband of singer Jean Shepard, accepted Cline’s offer to fly back to Nashville on her Piper Cub. But Cline’s manager Randy Hughes, the pilot, didn’t know how to fly by instrument. The plane crashed in stormy weather, and all on board died, including musician Cowboy Copas. Another musician died in a wreck while driving to their funeral.

Needless to say, someone wrote a song about it.

Aaron Barnhart is a Kansas City-based writer and TV critic. You can find his work at tvbarn.com and primetimer.com.

In conjunction with Ken Burns’ documentary series, Country Music, Kansas City PBS is highlighting local stories about the impact of country music in our region. Learn more at kcpt.org/country-music and tune in for the premiere September 15 on KCPT.  Presented by Bank of America.