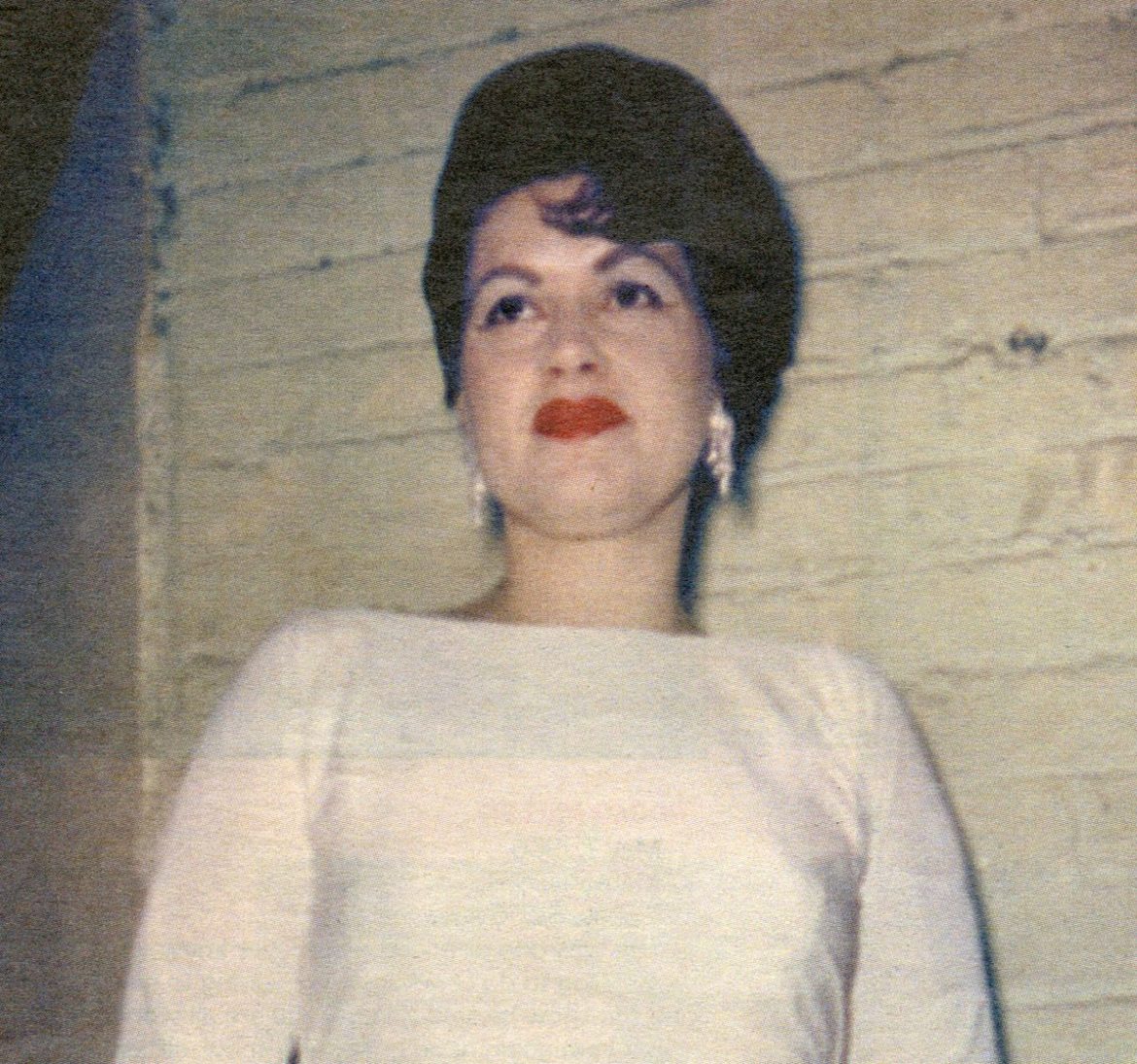 Mildred Keith had been asked to bring “The Book.”

That’s what the country music singers and musicians who scheduled appearances in Kansas City had come to call the scrapbook in which Mildred maintained the photographs she had begun taking in the 1950s.

On this day – March 3, 1963 – Mildred had brought the book to the concert at Memorial Hall in Kansas City, Kansas.

Mildred handed the book to a security guard, who disappeared with it. Perhaps an hour later he returned and caught Mildred’s eye. He led her backstage and then knocked on a door.

The door opened to reveal a woman wearing fire-engine-red lipstick and a long white dress.

“Girl,” said Patsy Cline, “you have a treasure.”

In the vast sprawl that is the story of country music in America, Kansas City can claim several cul-de-sacs.

Likely the most tragic is the March 5, 1963 death of Cline in the crash of a private plane in Tennessee.

The singer had been returning from the benefit concert organized for the family of “Cactus” Jack Call, a Kansas City country music disc jockey who had died in a car accident several weeks before. Also killed in the March 5 plane crash were performers Lloyd “Cowboy” Copas and Harold “Hawkshaw” Hawkins as well as Randy Hughes, Cline’s manager and the plane’s pilot.

In the decades following, Cline’s legend swelled as the singer’s story was shared in the films “Sweet Dreams” and “Coal Miner’s Daughter” in the 1980s, and her music was reissued on compact discs during the 1990s.

Meanwhile, Mildred Keith still had the photograph she had taken after her brief visit with Cline who – at Mildred’s request – had posed before a backstage brick wall while Mildred had squeezed off a single frame of film.

For years Mildred largely kept the picture to herself out of regret, she would later say, over the tragedy.

But at some point she carried copies to the Country Music Hall of Fame and Museum, as well as to various music industry veterans across Nashville. Charlie Dick, Cline’s husband, soon called Mildred, saying the photo represented “the most beautiful picture that girl ever had made.” He sent Mildred a $50 check, asking for four copies.

Then – over many years, as word of the image spread – hundreds of individual fans tracked Mildred down and requested prints.

Over time the image became known as the “Last Photograph” of Cline, even though at least one performance photograph from March 3, 1963 also surfaced, often credited to Francis Nunez, whom Mildred remembered as another fan who frequented country shows at Memorial Hall.

But Mildred’s image generated a momentum of its own. Unlike many photos taken by country music fans, often taken from a distant audience perspective, the “Last Photograph” had been exposed at close range, with the camera positioned at a slightly upward angle by the 4 feet, 11 inches Mildred.

She had been accorded such unusual access by Cline because – according to her son Jeff Keith –  the reputation of his mother’s photographs routinely preceded her.

“The performers, when they came to Kansas City, knew she was out there and that she had that book with her, with all her pictures,” he said.

Jeff, who in 1963 was a sometimes restless boy, watched the process many times.

“Memorial Hall is what I remember most. We would go down this concrete hallway. She’d have her camera and her photo album. Then somebody would take the album and bring it back to a room where somebody would look at it. I would be going, ‘Come on, Mom, let’s go.’

“And then somebody like Minnie Pearl would come out.”

Her sons remember the time she, during one of her trips to Nashville, called to announce that she had just spent the night in Johnny Cash’s house. When he learned that she was in town, Mildred explained, he had sent his driver over to her hotel.

The performers often would request particular pictures. Patsy Cline, Mildred said, had wanted a photo of McCall, the recently deceased Kansas City disc jockey. Mildred later described how she took out a nail file and gently worked the snapshot free of the scrapbook page, giving it to Cline.

When the Follies ended in the mid-1950s, Mildred began attending shows scheduled at Memorial Hall. By then she had replaced her original Brownie with an Argus Argoflex 75, a gift from her husband, Donald.

The upgrade made a difference in the Patsy Cline photo. Many photos taken by country music fans during the early 1960s were taken on black-and-white film. However, Mildred’s Argus Argoflex 75 accommodated 620 roll color film. That film, when used with a flash attachment for interior photos – like the Patsy Cline photo – produced superior results.

“Of course, this was back in the old negative days, and so she would take that negative, take it up to the drug store and get copies made,” said Jeff Keith.

Mildred would ask $5 to cover costs and postage for mailing the prints, usually 5-by-7 inches.

In this way, over time, Mildred Keith became a patron saint of Patsy Nation. At first, Mildred didn’t know what to think.

“It upset me a while, to think that she got killed right after that,” Mildred said in 2005.

“But I have met so many wonderful people because of that picture.”

Eventually, as the Patsy mystique grew in popularity, Mildred allowed staff members at Elko Camera in the 3100 block of Main Street to store the negative in the store’s climate-controlled vault. Then, when the requests for prints piled up, she would call Elko and order prints in bulk.

“One time I got a telephone call from a gal in Wales,” Mildred said. “She asked ‘Am I talking to Mildred Keith?’ She said ‘I saw that beautiful picture of Patsy and I would love to have one.’

Mildred’s husband Donald died in 1987, but she continued to attend shows at various local venues such as Genova’s Chestnut Inn and The Gold Buffet. In later years she traveled with close friend Carl Curtis, making regular pilgrimages to Nashville as well as Winchester, Virginia, where she attended the annual Labor Day weekend observances of Patsy Cline’s birth there on Sept. 8, 1932.

In 2006 performer Marty Stuart, himself a published country music photographer, invited Mildred to a performance with his band the Fabulous Superlatives at Kansas City’s Folly Theater, inviting her backstage – a familiar place for Mildred.

Just days before she died in 2012 at age 90, Mildred traveled to country music shows in Branson, Missouri, escorted by Curtis, who brought along Mildred’s walker and wheelchair.

Today, while Mildred’s family does not actively fulfill reprint requests, the image is easily retrieved online with the input of “patsy cline mildred keith” into any search window. The family does, however, maintain careful stewardship of “The Book,” which now fills 10 worn three-ring binders.

The camera used to take that photo, meanwhile, is literally a museum piece.

Brothers Rex and Don, with wives Barbara and Georgetta, in 2015 drove to Winchester to donate the Argus Argoflex 75 to the Patsy Cline Historic House, the restored home where Cline lived as a teenager and young woman, and where the camera is today on exhibit.

“We didn’t want to mail it,” Don said, “so we drove the camera out there.

“This will tell you how much they appreciated it. We went in and the guy came out right away and started talking to us about the camera. We had it in a little grocery sack. I set the sack down on the table.

“Made me feel good.”

In conjunction with Ken Burns’ documentary series, “Country Music,” Kansas City PBS is highlighting local stories about the impact of country music in our region. Learn more at kcpt.org/country-music and tune in for the premiere September 15 on KCPT.  Presented by Bank of America.

Women Shaped Local Politics Before They Had the Vote