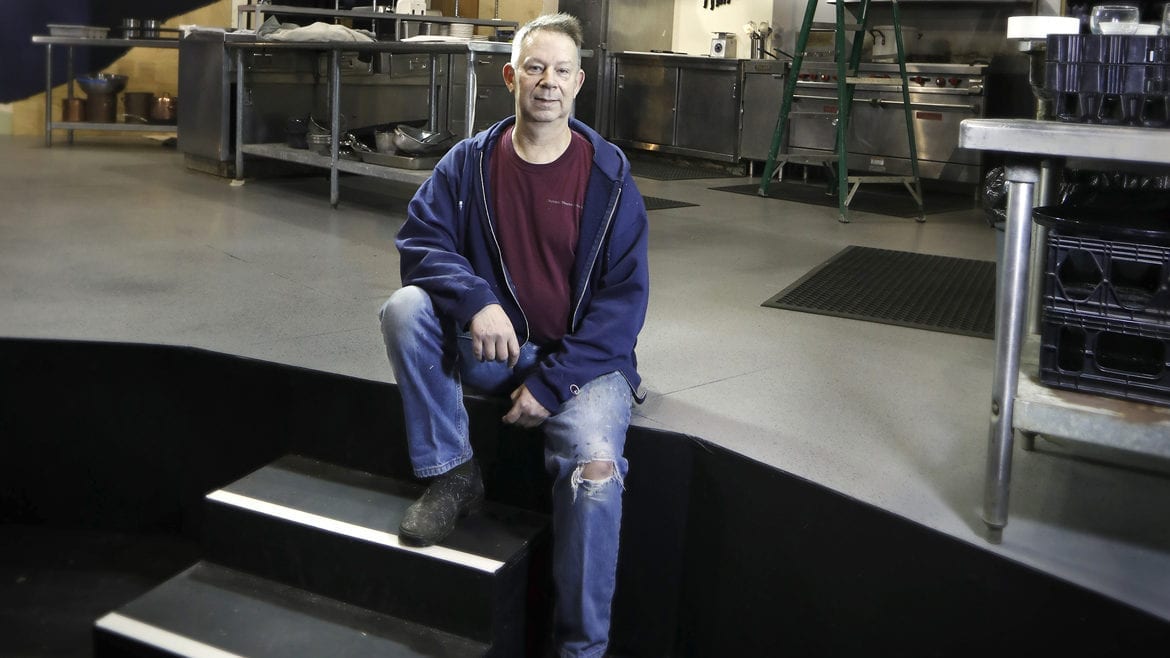 Set designer Gary Mosby on the set of "How to Use a Knife" at the Unicorn Theatre. (Photo: Jim Barcus | KC Studio)
Share this story

A stage manager has to make magic — to create an entirely new world on the stage that entices us in and holds us throughout the play. Gary Mosby, whose career as a designer and technical builder/director spans more than three decades, is one such magician.

Mosby is known for his innovations. For UMKC’s “Five Scenes From Life” (1990), he had the audience watch through prison bars. For Coterie’s 1990-91 production of “Most Valuable Player,” the Jackie Robinson story, he created a baseball diamond and installed bleachers for audience seats. His inclusion of hanging signs: “Negroes Not Served Here,” “No Coloreds,” “Whites,” prompted one critic to write “it looks like a Smithsonian exhibit on segregationist memorabilia.”

The Kansas City Star described Mosby’s Unicorn/KC Rep set for “Living in Exile” as “giving the impression of a huge battleship, despite the Unicorn’s cozy confines.”

“A good set always helps tell the story.”
Get into the world of Gary Mosby with this video from KCPT Producer Ashley Holcroft.

Mosby cites “Bat Boy: The Musical” as his most memorable set at The Unicorn, where he has been resident scenic designer for the last decade. With steel catwalks up to the ceiling and through the house, it was a “magical production,” he said. His recent favorites include sets for “My Name is Asher Lev,” “Blacktop Sky” and “Grounded,” all at the Unicorn.

For Mosby, working with other talents is key. “Good and great theater is created by a strong sense of team,” he said. “I greatly enjoy collaborating with other designers, directors and actors and have been given some great suggestions from all around the table.”

Mosby grew up in St. Louis, where he developed his construction skills working in his father’s home-building business. He became involved in the theater in middle school and high school, then majored in theater design and technology at Southwest Missouri State. After a break of several years, he enrolled at Tarkio College and graduated in 1988.

A Master of Fine Arts in Theatre Design and Technology from UMKC followed. He now heads the theater technology department at KCK Community College.

Mosby’s first job was stagehand for the Goldenrod Showboat, the last showboat to work the Mississippi, doing melodrama and vaudeville. He followed that with positions as technical director for St. Louis Community College, Florissant (which operated a wonderful Theatre for the Deaf company, as well), and Tarkio College.

It was at Tarkio in 1987 that Jim Assad of American Heartland Theatre saw Mosby’s production of “Ain’t Misbehavin’” and offered him the job of designing the same show for AHT. Mosby’s Kansas City career was off and running. He was hired by Dinner Playhouse (now The New Theatre) and by KC Rep. For a while he ran his own studio, Design Production Services, which designed the space and water areas of Hallmark’s Kaleidoscope, the company’s free public creative space for children.

Mosby names the 1992 – 1995 Dickens Holiday Fair, a benefit for KC Rep, as his “largest and probably biggest professional success.” The 66,000 square-foot reproduction of Dickensian London at Municipal Auditorium cost approximately a half-million dollars and took two-and-a-half years to build.

But Mosby is just as attentive to small details. For one of four Pinter plays in rotation at KC Actors Theatre, director John Rensenhouse remembers Mosby custom-making sofa pillows to fully define the play’s environment. They were so beautifully crafted that they now adorn Rensenhouse’s home.

Mosby attributes his success to “knowing how things work and are built, as well as the aesthetic that I learned along the way.” His achievements continue to enthrall and dazzle.