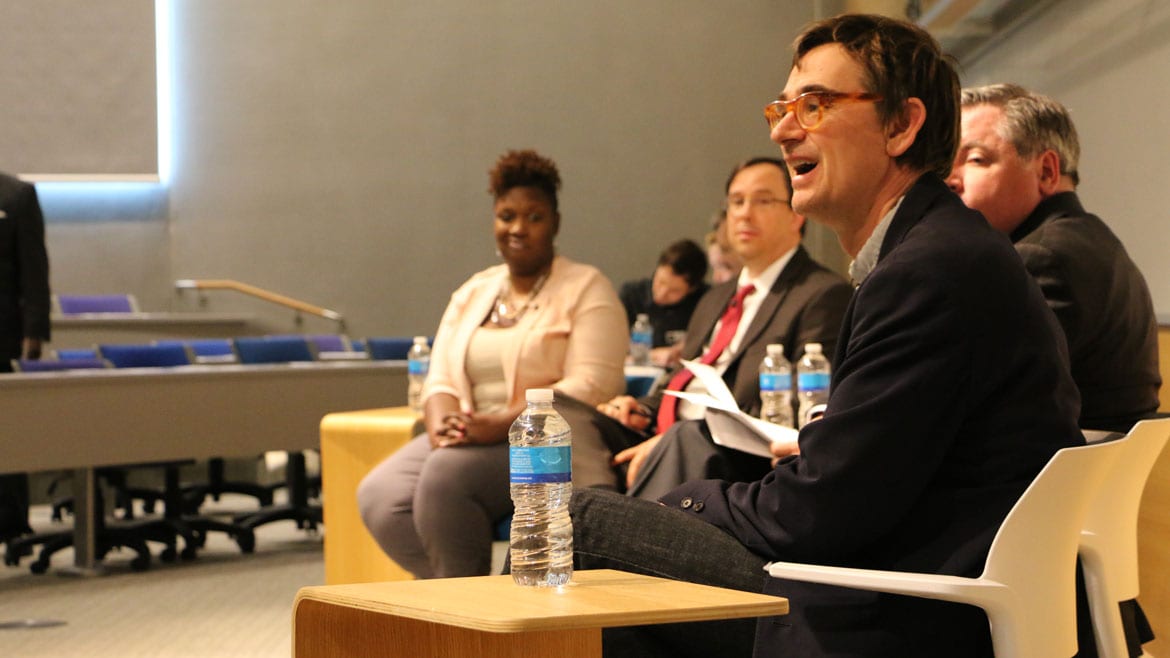 Clancy Martin, a professor of philosophy and business ethics at UMKC, speaks during a race and justice panel at the university Wednesday.
Share this story

Since the death of Mike Brown in Ferguson, Missouri, last year, news outlets have been full of stories of racial injustice in the criminal justice system. In the last week, Baltimore has been in turmoil as protesters wait for answers about what killed a young black man, Freddie Gray, while he was in police custody.

In an unintentionally timely move, the Village Square and the UMKC Student Government Association hosted a panel conversation about the intersection of race and justice Wednesday afternoon.

Village Square is a nonpartisan discussion forum that aims to facilitate civil discourse about difficult political topics. To cover several different aspects of the complicated topic of race and justice, the panel consisted of Clancy Martin, a UMKC professor of philosophy and business ethics; Toya Like-Haislip, a professor of criminal justice and criminology; David Bell, criminal defense lawyer; and Eric Zahnd, Platte County prosecutor. Only Like-Haislip is African-American.

The demographics of the panel were questioned by an audience member: “Please discuss the effect that even the demographic of this panel reflects on the very issue we’re discussing.”

Martin said he was surprised by the demographics of the panel when he arrived and met his fellow panelists, but he did note that progress has been made as far as inclusion is concerned.

“If we imagine this panel 30 years ago, it probably would look differently than it does right now,” he said, meaning that Like-Haislip, a black woman, would probably not have been included.

Like-Haislip seemed to agree with this point, but she added that, being a middle-class academic, she can only add so much to the conversation. She would have liked to hear from a black American with fewer economic advantages.

“How much more powerful is the voice of someone who is impacted daily by the experience of race and justice than even middle class African-Americans?” she asked.

Throughout the discussion, the panelists touched on many ways that race and the justice system interact: for example, through policies such as racial profiling and “driving while black,” racist drug sentencing laws and the mass incarceration of black men.

“We have to look at our justice system and the way in which it was framed, especially when it comes to people of color, mainly African-Americans,” Like-Haislip said. “Essentially, in our country you have institutionalized racism. If you look at it historically, we have laws that actually make African Americans less equal.”

Martin pointed out that the 20th century is full of a systematic revision of unjust laws. That job isn’t done yet, he said, mentioning to the current Supreme Court debate over same-sex marriage.

Bell said he has seen changes in the way race impacts justice in America, but it’s not enough.

“When the pigment of our skin no longer matters in our society, then you will have a fair criminal justice system,” he said. “I think that we can look forward to that. Over time, if you graph it out, we’re moving in a positive direction. We’re just not moving fast enough.” 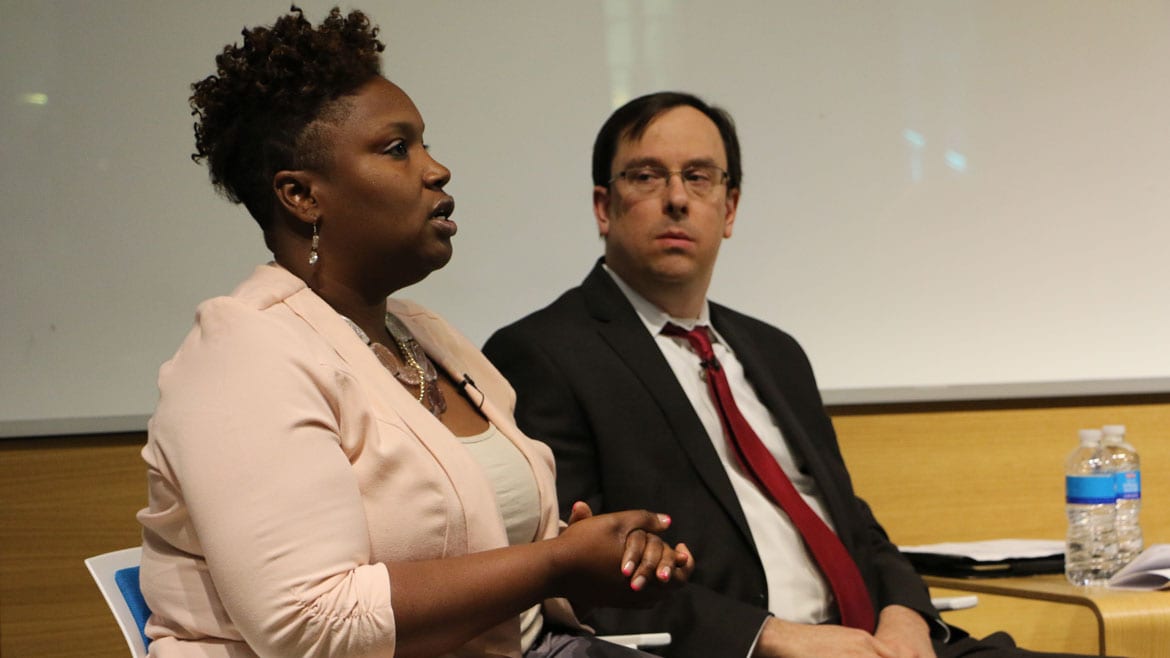 Martin, the professor of philosophy on the panel, brought up John Rawls’ Veil of Ignorance, a philosophy exercise that proposes a country start from scratch: Make all new laws and regulations. The catch, though, is that, after making these laws, you have no idea what kind of citizen you will be: Will you be black or white? Rich or poor? Woman or man? Disabled or able-bodied? Because of this uncertainty, it becomes important to legally protect the most disadvantaged in the society.

While he didn’t suggest that America should actually follow through with this exercise, he did use it to make a point: When laws are developed by primarily one type of person — white males — the rest of the citizens are left in the dust.

Martin further illustrated this point with a personal story. His daughter was recently caught smoking pot in her car. She was arrested.

“To make a long story short, about $8,000 later, she’s totally free and clear of this whole process,” he said. “It got me thinking about the enormous privilege of her particular position. If she didn’t have a dad who could just get on the phone with an attorney and give him a credit card and say, ‘OK, do whatever has to be done,’ her whole story would have, of course, turned out very differently than it did.”

The American issue of race and justice is complicated and ugly. There are no easy solutions, the panel said. Two concrete steps towards a better system were discussed, however: the addition of body cameras to police officers’ uniforms and the intense recruitment and training of black police officers and prosecutors.

County prosecutor Zahnd said he has grappled with the issue of body cameras, but ultimately thinks that the good outweighs the bad.

The good, he said, is having concrete visual information when it comes to situations like Mike Brown’s death in Ferguson (no video) and Walter Scott’s death in South Carolina (video captured by a third party). Like-Haislip was quick to point out that video is not always on the side of justice. While Eric Garner’s death at the hands of police was caught on camera, no law enforcement officer was indicted.

The downside of body cameras, Zahnd said, has to do with privacy.

“When an officer is wearing a body camera and we’re talking about going to people in very difficult situations, for example, a domestic violence situation, and he goes inside a person’s home,” he said. “We need to think about the intrusion on people’s privacy.”

He added that victims may be less willing to talk to police if they know they’re being recorded.

“And if there were more African-American than Caucasian prosecutors in the prosecutor’s office, I imagine there would be some concrete changes in the way that things are handled,” he said.

Artists in Residence: Creative Strategies in the Age of Coronavirus

Age of Coronavirus: A Wistful Drone of Bagpipes Echoes in Brookside

A Lone Piper Draws Neighbors Together... But Not Too Close

Age of Coronavirus: KC’s Role in Winning the War on Polio

Age of Coronavirus: KC Area Far Short Of Space For Homeless During Pandemic