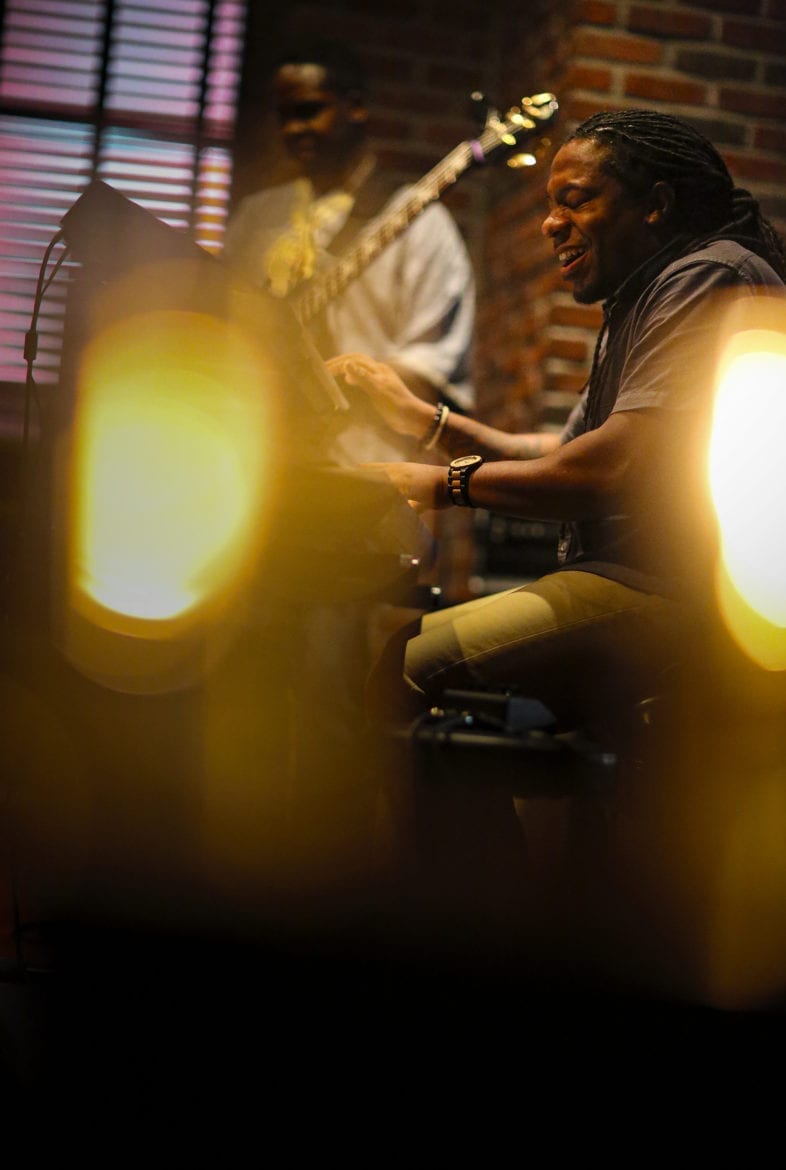 Eddie Moore performs at The Kill Devil Club in Power and Light in September. (Photo: Jim Barcus via KC Studio)
Share this story

Kansas City has been a special place for jazz for nearly 100 years. Since its inception in 1997, the Charlotte Street Foundation has noticed and honored this heritage, most recently by awarding a 2016 $10,000 Generative Performing Artist Award to pianist, composer, educator and band leader Eddie Moore.

Moore is a popular and well-known presence in Kansas City, regularly performing with his band, Eddie Moore and the Outer Circle, at notable local venues including The Blue Room, Green Lady Lounge, and Yardley Hall at Johnson County Community College.

Experiencing Moore’s music live is like surfing ever-shifting grooves. The band journeys through a multitude of stylistic influences and interests, but it never sounds like a musical hodgepodge. Rather, each twist and turn makes perfect sense compared to what came before it.

Moore and his band have played regularly at the Vine Street Studio Art Gallery run by Pat Jordan, who is also president of the Gem Cultural and Educational Center. “I think he is one of the most gifted and talented musicians in Kansas City,” Jordan said. “His award certainly underscores this. He’s truly a musical force to watch.”

Moore and the band also tour nationally and have produced three recordings. His debut recording as a leader, The Freedom of Expression, was released in 2013 and received 3.5 stars from Downbeat magazine, as well as national and international praise.

Whether he’s leading a jam session at Californos, fronting the Eddie Moore Trio, or gigging with his group The Outer Circle, Eddie Moore is among the busiest of Kansas City’s young jazz players. This short feature is part of KCPT’s ongoing coverage of the arts in collaboration with KC Studio Magazine. An expanded version will appear on Arts Upload at 7:30 p.m. Thursday, Jan. 19.

Charlotte Street established the Generative and Performing Artist Awards to “recognize artists creating outstanding, innovative, original work in the fields of dance, theatre, music, performance art, and hybrid/interdisciplinary versions thereof,” according to the foundation’s website. With its prize to Moore, Charlotte Street continues to favor jazz artists whose work strives to move outside the time-honored canon of classic songs usually associated with jazz, a trend that started in the inaugural year’s award to Mark Southerland.

Charlotte Street provides its prize without strings, meaning that artists can choose how to use the funds. In Moore’s case, the cash is being used to help expand the brand of his band by touring, providing marketing and promotion for his recordings, and traveling to the South by Southwest music festival in Austin, Texas.

When discussing his music, Moore focuses on the hybrid nature of his influences and output. His background in jazz runs deep. He was raised in Houston, Texas, and was a working musician before moving to Kansas City to get a master’s degree in Jazz Studies from the UMKC Conservatory of Music.

Eddie Moore and the Outer Circle serves as Moore’s primary vehicle of expression. He also performs in reggae, rock and hip-hop settings. At the recurring jam session he hosts known as “Fresh to Def,” he seeks to bridge the gap between jazz musicians, MCs and rappers, noting that they all rely on improvisation. He also has plans for a jazz and hip-hop recording project utilizing prepared piano, which incorporates objects between or on top of piano strings to produce a variety of percussive effects.

On his recent release Kings and Queens, recorded with Adam Schlozman on guitar, Pat Adams playing drums, Deandre Manning on electric bass and Daniel Robinson playing alto sax, the swing rhythm so often associated with jazz seems mostly absent. In Moore’s words, the three-part title track begins with polyrhythms, signaling the African roots of jazz, and then moves through and incorporates various other musical styles such as electronic music, R&B and hip-hop. Close listening to the recording reveals additional influences such as the blues, modal jazz of the 1960s and 1970s and pop music.

Moore feels that jazz is music of its time and place, and that swing in particular belongs to a specific period that he and his contemporaries do not live in. He states, “When I walk down the street, what does Kansas City sound like today? I’m more likely to hear hip-hop than swing.”

From Moore’s perspective, the takeaway for listeners of his music should be that “Jazz isn’t what you think it is. It never really has been. Maybe we should just call it improvisation.” For a historical perspective on this assertion, Moore invokes none other than Duke Ellington, who at one time suggested that his music be called “music of freedom of expression” rather than jazz.