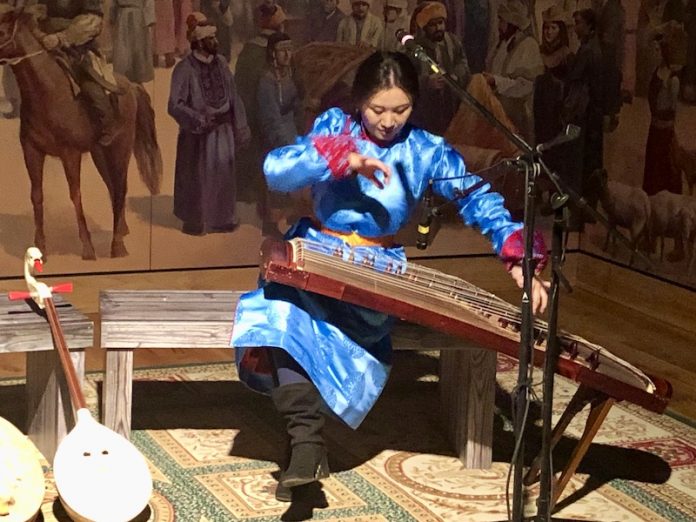 Genghis Khan, the 13th Century Mongol leader who became one of the greatest and most feared conquerors in world history, has invaded Union Station with an exhibition of his life and legacy that will run through April 26.

The exhibition features 300 objects ranging from a wagon-size crossbow and catapult used to to attack fortified cities to medallions that provided safe passage for diplomats traversing his continent-spanning empire.

What he accomplished during his 65 year life was “paramount” in the course of world history, said Mongolian Ambassador Yondon OTGONBAYAR, who was in Kansas City last week for the exhibition opening.

“He was an illiterate nomad who’s father was poisoned when he was nine and then he was convicted of killing his half-brother,” OTGONBAYAR said.

“When it looked like he had no hope to survive, he united the Mongol tribes and conquered half the known world.”

The reputation of Genghis and his heirs for ruthlessness was well deserved. The ambassador estimated 40 million people perished during the first 100 years of their reign. But it also ushered in an era of “Pax Mongolia.”

“Once the empire was created, it was so peaceful it was perfectly safe for a single woman with gold jewelry to travel from Kiev to Bejing and nobody would touch her,” he said.

Other aspects of the Mongol Empire included respect for different religions, a postal relay system comparable to the old Pony Express, eye glasses and the creation of the Silk Road, which allowed safe trade between Europe and the Far East.

OTGONBAYAR also said Genghis Khan was no better or worse than other warriors of his time.

“In the 13th century, nobody was humane,” he said. “Wars are wars and it happened that way.”

Genghis Khan lived 65 years, from roughly 1162 to 1227, and despite his fame, nobody knows where he was buried. His descendants went on to expand the empire as far as eastern Europe, India and all of China.

The ambassador said with an army of 100,000 soldiers, he conquered the equivalent land mass of Canada, the United States, Mexico and Brazil. A 131-foot tall statue of him is located in his native land.

“For Mongolians, he’s the father of the nation,” OTGONBAYAR said.

The exhibit at Union Station, “Genghis Khan: Bringing the Legend to Life,” has been on the road for 10 years and has attracted more than 2 million visitors in cities including Singapore, Vancouver and around the U.S., according to its creator and owner Don Lessem.

Visitors to the Genghis Khan exhibition will be given the identity of a Mongol Empire resident and will follow their lives across six key scenes: The Grasslands, Rise of the Mongols, The Walled City, The Silk Road, the Palace of Kublai Khan and Mongolia Today.

“Genghis Khan’s story, and those of his sons and grandsons during the formation, peak and decline of the Mongol Empire, will be brought to life in this unforgettable journey.”

A Flatland Flight of Fancy for 420 Day

How to Party in a Pandemic

The Filter Ep. 2: 'Alone Together'

We Talk Race, Politics and the Pandemic