The Son in ‘The Butcher’s Son’ 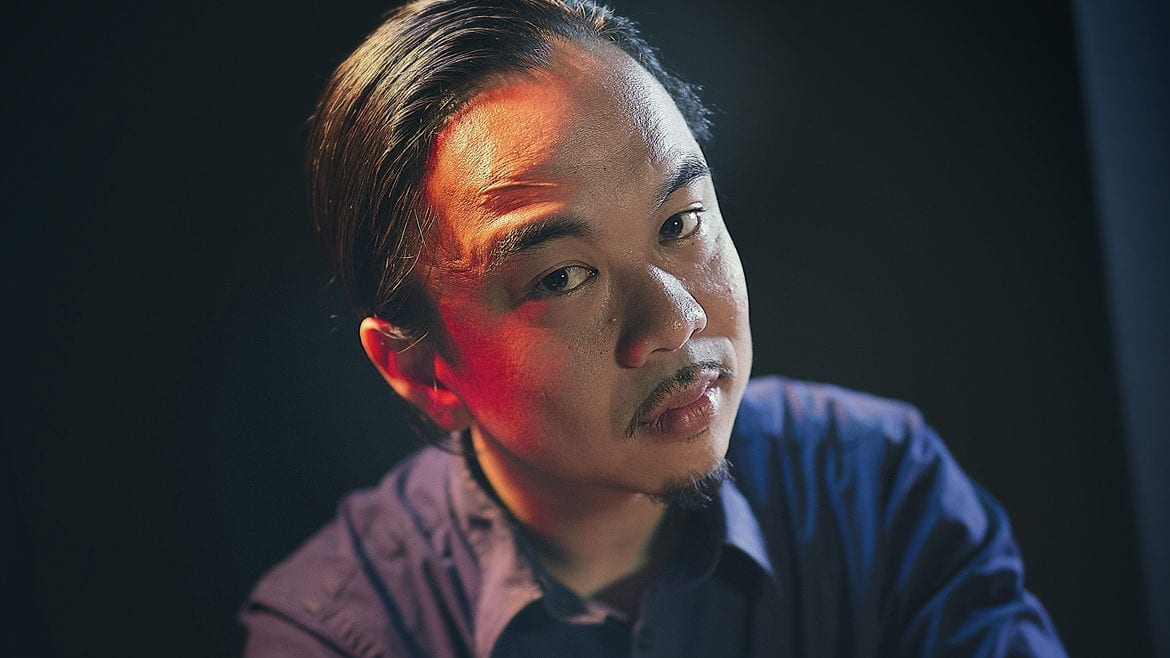 Vi Nhan Tran plans to continue touring 'The Butcher’s Son' in the spring, with additional dates in Kansas as well as out-of-state theaters and festivals. (Photo: Jim Barcus)
Share this story

Vi Nhan Tran was smuggled out of Vietnam and captured by the Khmer Rouge in Cambodia before finding refuge in a Red Cross camp in Thailand. It’s a story of a lifetime — and all before he was three years old.

Tran’s only memory from that part of his life is busting his head open falling off his refugee-camp cot; the resulting scar on his forehead is the only physical marker of his early adversity.

But there was an epic story behind that scar and Tran’s family wanted him to tell it.

Growing up as an immigrant in western Kansas, Tran fell into the stereotype of the hyper-achieving Asian kid; he was very driven academically and saw a clear path leading to law school or med school. Then he found the arts.

“My parents gave me their blessing,” Tran says with tears in his eyes. “A lot of Asian parents probably wouldn’t have, but my parents told me they didn’t bring me here to play out a stereotype. They brought me here so I could choose.”

Tran chose a career in the arts, earning a bachelor’s in theater and English, and a master’s in directing at Kansas State University. He quickly became a part of the Kansas City arts renaissance when he moved here in 2005; he is a storyteller, an actor, the leader of the Vi Tran Band, an arts advocate, and the owner/curator of The Buffalo Room artists’ salon at Westport Flea Market.

But when his father died from cancer in 2009, Tran felt himself at a crossroads.

“My father’s death personalized the man I wanted to become. It was through my grieving process, coupled with my coming of age and my emergence an artist, that it finally felt like the right time to start working on the story.”

But it wasn’t until 2014 that the show materialized. Tran had been considering making a concept album with his band about his family’s story but his wife — and the show’s eventual director — Mackenzie Goodwin Tran, suggested he use his skills and experience as a theatrical artist to create a play.

Soon afterward, Tran was having a drink with Jeanne Murphy, a producer who was working with the Westport Center for the Arts. Murphy mentioned that the WCA needed a project, a compelling story to tell.

“The light went off in my head,” Tran recalls. “I told her I had a project; a folk musical about my refugee story. She loved the idea. When I told her it wasn’t finished yet we both had a laugh. But she was still interested. So now I had a deadline to deliver this show that my mother had been hounding me to write for years and years and years.”

The Butcher’s Son, billed as a “Refugee Performance Memoir,” premiered at the Buffalo Room in the Westport Flea Market in August, 2014.

This past May, Tran, financed by grants from ArtsKC and the Kansas Creative Arts Industries Commission, took The Butcher’s Son on tour to small meat-packing towns in western Kansas with large immigrant populations.

“The immigrants are mostly Hispanic and Somali now,” Tran says. “But it’s the same story. Immigrants in western Kansas aren’t going to come see theater in a big city so I took my story, their story, to them.”

“I took it to my hometown. Mom and sis flew down to see it. It was a wonderful homecoming for all of us. That was Memorial Day weekend. Then came Father’s Day. And it all hit me. I was happy to have been able to tell my father’s story, but he’s not here to hear it, to see it. I understand all of the sentiments of “he knows and he sees and he’s proud,” but it doesn’t make that grief hurt any less. At the same time, there’s the paradox of knowing that this was the only way the story could play out. Without his passing, this story would not exist in the form it does now. I can’t celebrate it with him because it wouldn’t exist unless I had lost him.”

Tran’s story, his family’s story, seems all too important right now. The idea of our nation as “one people made from many” is constantly under revision by each generation’s arbitrary limitation on who those “many” are allowed to be.

“Writing The Butcher’s Son was a debt I had to pay,” Tran says. “My mom and my dad slaughtered cows so that I could be in plays. The obstacles they had to face with their broken English, they couldn’t tell this story. It is my responsibility to be their voice, and to be a voice for others who aren’t able to tell their stories.”