From farmers market to brick-and-mortar 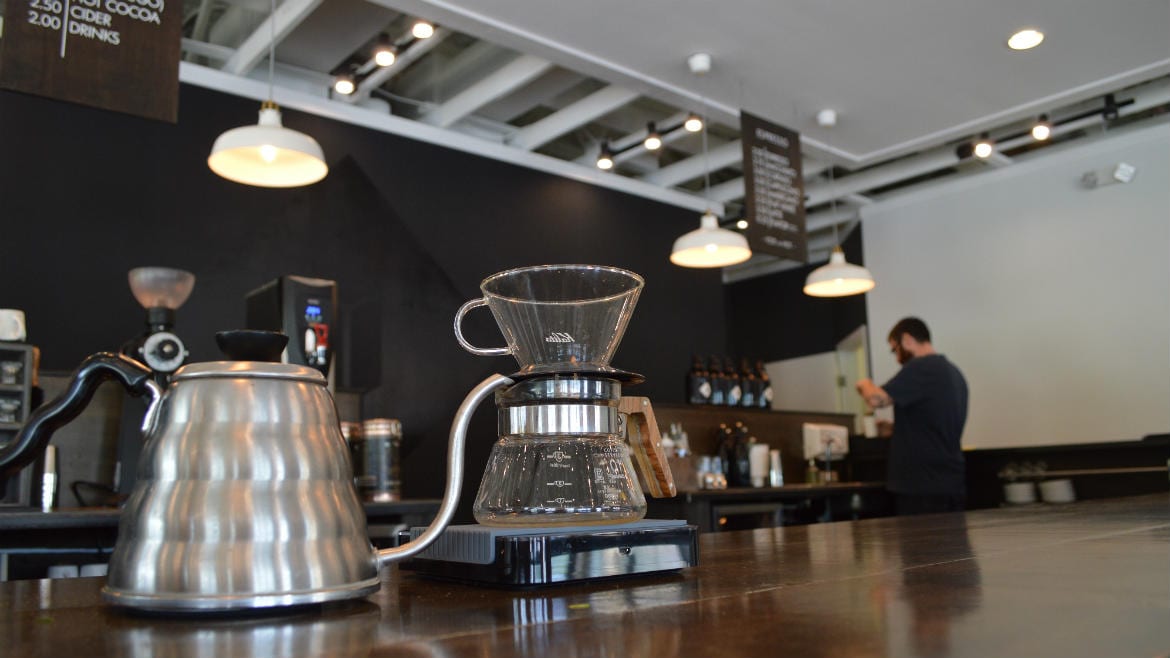 Levi Holland adds another sealed black bag of coffee beans to the small pile that is accumulating on a set of distressed wood shelves only a few feet from the front door at Post Coffee Co. Behind him is the 5-kilogram drum roaster that he’s running on a Wednesday after a busy holiday weekend – the word is out in Lee’s Summit about Post.

“Everyone sees us roasting the coffee,” Holland, a co-owner of Post, says. “We do everything here but grind it and mill it. So we can explain how we got the coffees got in, how we taste them and then guide their experience about what they’re tasting.”

A few steps from Holland, a bearded 20-something sips his coffee with the thoughtful face of someone who has stopped thumbing keys long enough to consider what’s happening in his cup. With cool white walls, minimalist décor and sun-dappled wooden tables, a bit of urban cool has been stretched over 2,600 square feet in the suburbs. While hipsters have discovered Post, they’re usually bringing their Croc-shoed kids along with them.

“Post is literally a fence post. It’s a connecting point, a support place for people to come together,” co-owner Tanner Stevens says. “We have families, so of course, we want everyone to feel welcome.”

The Post Coffee Co. started last summer in the garage of Stevens, who is Holland’s business partner. The pair would roast coffee to serve and sell at the Downtown Lee’s Summit Farmers Market.

They’d load up their three-piece wooden bar, which is currently along one wall of the Coffee Lab in the shop, into Stevens’ green Volkswagen Westfalia. They then would set up heat their coffee on a mobile Coleman unit.

“It was romantic. Twice,” Stevens says. While they got to know their community and product at the market, they were also busy demoing and building out the space at 200 NW Chipman Road in Chipman Commons. The work started in May 2014 and they opened their brick-and-mortar coffee shop on January 1, 2015.

“This about investing in an community and about how to be present in the neighborhood,” Holland says.

Holland has been working in specialty coffee shops for the past eight years, while Stevens might be familiar to downtown java folk. He helped found Quay Coffee in the River Market.

“We thought there was nothing really like this in Lee’s Summit,” Stevens adds.The coffee menu was designed to be simple. They often offer a pair of $3 pour-over coffees and a $4 coffee – the more expensive option is typically a micro-lot, something they only have a few bags to feature. Both men are excited about the Recuerdo, a direct trade coffee from Colombia with granny smith apple and honey notes, which they’re currently pouring.

“We follow a traditional Italian espresso menu,” Holland says of the drinks produced on the gleaming white La Marzocco. “We want to let the coffee speak for itself. We source excellent and complex stuff that we can manipulate subtly with roasting.”

Stevens suggests thinking of the coffee menu from top to bottom as drinks with progressively more milk in them – espresso, macchiato (a double shot of espresso in a demitasse marked with milk), cortado (equal parts milk and espresso), cappuccino (steamed and foamed milk), Americano, flat white and latte.

Post’s espresso blend marries coffee from Brazil and Costa Rica, Stevens says it has strawberry and chocolate notes. That latent sweetness is why the shop uses it for its blend today. They’ll start selling growlers of cold brew coffee in June.

“We use a cloth toddy filter for the toddy,” Stevens says. “I think it gets out the harshness and it’s somewhere between a paper filter, which is restricted, and the Kyoto, which presents everything in a coffee.”

While their focus remains on coffee, Post has a small prep kitchen in back. The Peel: A Bountiful Baking Company currently makes the snacks for their shop. Baker Angela Swope has been serving up donuts, biscuits and Dutch Letters, a staple in Iowa which Holland likens to a “a really soft croissant-like pastry with almond paste in the middle.”

“Our next big goal is education,” Stevens says. “Coffee is a very deep rabbit hole and we like helping people to understand more.”

In the future, Holland and Stevens are looking to open up the Coffee Lab – a big bay window showcases the bags of green coffee and tasting wheel painted on the wall in the rectangular room off the main coffee shop floor — for public cuppings, tasting and brewing technique classes. And they’ve got their first collaboration in the works with another shop in town. Beginning in June, they’ll use Poppy’s Ice Cream for affogatos (espresso with vanilla ice cream) in the evening.

“We just extended our hours until 8 p.m. because as we’ve had more regulars people are telling us that they’d like to stop by on their way out or way home in the evening,” Holland says.

This summer, they’ll keep popping up at the Lee’s Summit Farmers Market for special events like Christmas in July and are starting a coffee program with reusable airtight containers. Moving from Kansas City to Lee’s Summit, Stevens has seen a spirit of coffee camaraderie extending between both cities.

“It’s cool to be a part of a coffee community where people push coffee based on geography,’ Stevens says. “It’s amazing to be just starting out and hear other coffee professionals say that people should come here if they want good coffee.”

No Bumper Crop of Medical Marijuana in Missouri

One thought on “From farmers market to brick-and-mortar”