What you learn when you walk — really walk — around Kansas City 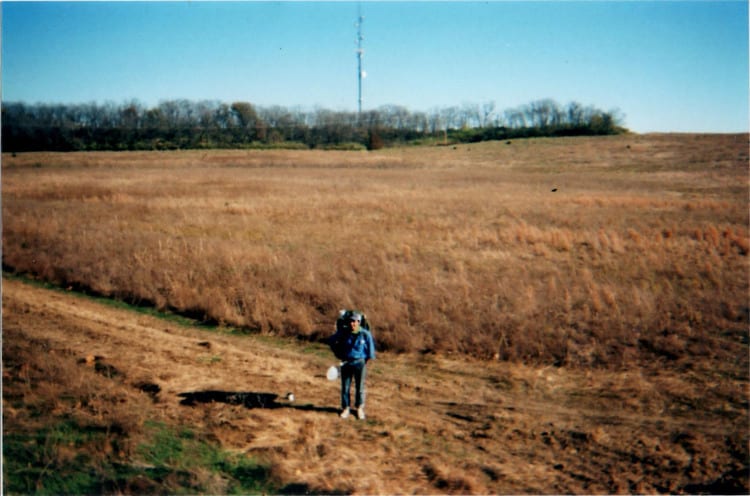 Kansas City is a lot bigger than we tend to realize. The majority of the population is concentrated into just 58 square miles that make up less than a fifth of the city’s overall size. That leaves a lot of mileage to discover. Here’s a story by Esther Honig, from audio producers Fountain City Frequency, about one Kansas Citian that spent 15 days walking the city’s 212-mile border, and what he discovered about himself and his city.

In the attic of his single story home on Kansas City’s east side, Charlie Mylie is packing for a trip. He has a single camo tarp and cord that he’ll use as a tent, white Converse sneakers for trekking, and an antique Kelty backpack to carry the rest of his essentials: book of Rumi poetry, a sleeping bag, canned tuna, beans, and ramen, as well as a map and compass to navigate.

After months of planning, this is the night before Mylie’s departure. He’s carefully considered the potential risks and daydreamed about the uncertainty of what he’ll find. He’s prepared for an adventure, a project he’s calling the “Big Inhale,” but rather than fly to a foreign country or seek solitude in the wilderness, Mylie says that for this trip, he’ll hardly go anywhere at all.

“It made perfect sense that I could always be 30 minutes from home,” he says. “But still go on a long journey, and be a tourist in our own town, which is hard.”

Mylie will walk the border of Kansas City, Missouri, all 212 miles. Depending on the distance he manages to cover each day, the trip could take him three or four weeks. Along the way he’ll camp, maybe grab a bite from a nearby diner, and clean up in the public restrooms. He hopes to discover the corners of Kansas City that he says few people actually consider when they imagine this sprawling metropolis.

“Loving the Royals, going to the Power & Light and First Friday is a very small part of our city,” he says. “There’s a challenge to love it in its fullest.”

This particular November the weather is unexpectedly pleasant. This is not the bone-chilling fall of last year. Without the summer heat, conditions could not be more ideal. To document this journey Mylie has packed a pair of disposable cameras, and as a professional artist he’ll be reflecting on the experience of each day through his drawing and writing. For Mylie this trip is as much a creative endeavor as it is civic engagement. As a resident for the last decade who boasts a great deal of pride for his city, Mylie wonders how this trip will expand his perspective on Kansas City.

“Will I love the city on its far weird unknown parts?” he asks. “I want to see what that city is, and the idea that there’s cows grazing in our city — like how does that affect our city and do we ever think about that?”

Once Mylie has filled his backpack with all of the necessities, he fastens the straps, and sets the pack aside. Now it’s time to sleep. As he walks, his friends will have the opportunity to join him for a couple a miles. But for the most part Mylie will be going at it alone.

Charlie Mylie has been on the trail for three days when I meet up with him one morning on the eastern shore of Longview Lake on the border of Lee’s Summit. It’s a wooded area tucked behind a community college and a golf course. If you ignore the apartment complex up the hill, it almost feels secluded. Then, around the corner comes Mylie, his backpack shifting and jingling as he walks.

His spirits are in good shape and he’s eager to eat breakfast. But rather than down a cup of cold oatmeal, we head to the McDonald’s up the street.

“Loving the Royals, going to the Power & Light and First Friday is a very small part of our city. There’s a challenge to love it in its fullest.”

Already Mylie is full of stories. He’s made a point to hang out at the local bars and talk to people he encounters in his walk. He says he’s learned a lot about the cultural reputation of cities like Raytown and how people there interact with the border. For instance, take the man he met last night, John.

“He identifies as Raytown even though he lives in Kansas City,” says Mylie. “His daughters went to school in Raytown and he feels like Raytown has a small-town vibe and he relates to that.”

Once we arrive at the golden arches and Mylie has selected a McMuffin combo, we sit down to talk about what else has happened. So far he’s walked 50 miles and has done pretty well navigating by map and compass, though he says he did get lost once. His biggest revelation has come from the places he’s discovered, none of which are destinations he says he would visit otherwise.

“Things that I might want to go see or that I would be attracted to just aren’t on the border,” says Mylie. “It’s been a matter of stopping, even just for a few minutes, at a body of water or something that I think is beautiful and remembering to take it in …”

He’s trekked through strip malls and suburban developments, or walked for hours along shoulder-less highway. In these bleak surroundings he’s managed to discover a few gems, like the other day when he stumbled upon the historic Santa Fe trail off Blue Ridge road. The trail brought him to a cave with a small creek and for a moment he was transported somewhere secluded and quiet. He removed his shoes to dip his sore feet in the cool water and escaped the long walk that still lay ahead. “It’s been a matter of stopping, even just for a few minutes, at a body of water or something that I think is beautiful and remembering to take it in …” says Charlie Mylie. (Photo: Fountain City Frequency)

Twelve days on the trail and Charlie Mylie has made it halfway to completing his trip. He says his feet have gone from sore to numb — the Converse sneakers probably haven’t done much good. He’s had knee pain from all the walking — cranking out close to 20 miles on some days — and he’s had to take time off to recuperate. From here he estimates he has at least two more weeks on the border.

It’s early evening when I meet him at the old water treatment plant off I-69. The sun sinks to the horizon as we make our way north along the Missouri river towards the international airport. The water and sky are lit a warm amber. This is what Mylie calls the “golden hour.”

For this trip Mylie has prepared a series of questions that he asks himself each day. He says it’s a way of reflecting and building intentions for the walk ahead.

For example: What does the city mean today? What are my boundaries? And, what about today has changed my perspective of Kansas City?

Mylie says the answers to that last one have remained fairly consistent. On this trip he’s uncovered a lot of wilderness and open space that he says we in the city tend to take for granted.

“I hear people talk all the time like, ‘Kansas City, there’s nothing outdoorsy to do,'” says Mylie. “But we have huge protected forests, we have all these trails, all these waterways, easily accessible lakes … It’s been redefining my view of the city.”

Listening to Mylie describe the streams and meadows he’s stumbled upon, or the conversations he’s shared with perfect strangers, I can tell he’s falling in love with the city in a whole new way. He’s become an expert on the border wars, and which small towns were swallowed into the city’s annexation, and how it feels to live in Raytown versus Kansas City or Independence.

“We have huge protected forests, we have all these trails, all these waterways, easily accessible lakes … It’s been redefining my view of the city.”

This is the big inhale. He says his perspective is expanding, opening up to embrace a new meaning of what it means to love Kansas City.

Stepping Off the Trail

At the BNIM office overlooking the Crossroads, Charlie Mylie sits in a cushy swivel chair, dressed in slacks and a button-up shirt. He’s back at his artist’s residency. It’s been four days since he completed his trip and while his appearance is back to normal, he says his emotions are still catching up to him.

“I need more alone time now,” he says with a laugh. “And I cried the other day at the coffeeshop.”

He’s continued reading poetry by Rumi and walking rather than biking or driving. But there’s something that he encountered on this trip that he can’t seem to get back to: a frame of mind that he says relieved the weight of his everyday life.

“The thing that I had been looking for the entire time that I was out there,” he says, “was falling in love with a road, or a stream, or leaves falling off of a tree.”

It took Charlie Mylie just 15 days to complete his walk around the border — a few weeks less than he anticipated. In that short time, Mylie says he crossed a threshold. The forgotten space behind the big box stores, between the cul-de-sacs, and apartment buildings was transformed into a pristine wilderness. Friendly strangers and engaging conversations found him neighborhood bars and diners. It’s an experience he wants to have again, by planning more walks — and he hopes to share it with others.

“I think that’s the thing that makes me saddest,” says Mylie, “that people aren’t doing this.”