A loyal Royals fan happily discovers he was wrong, all along 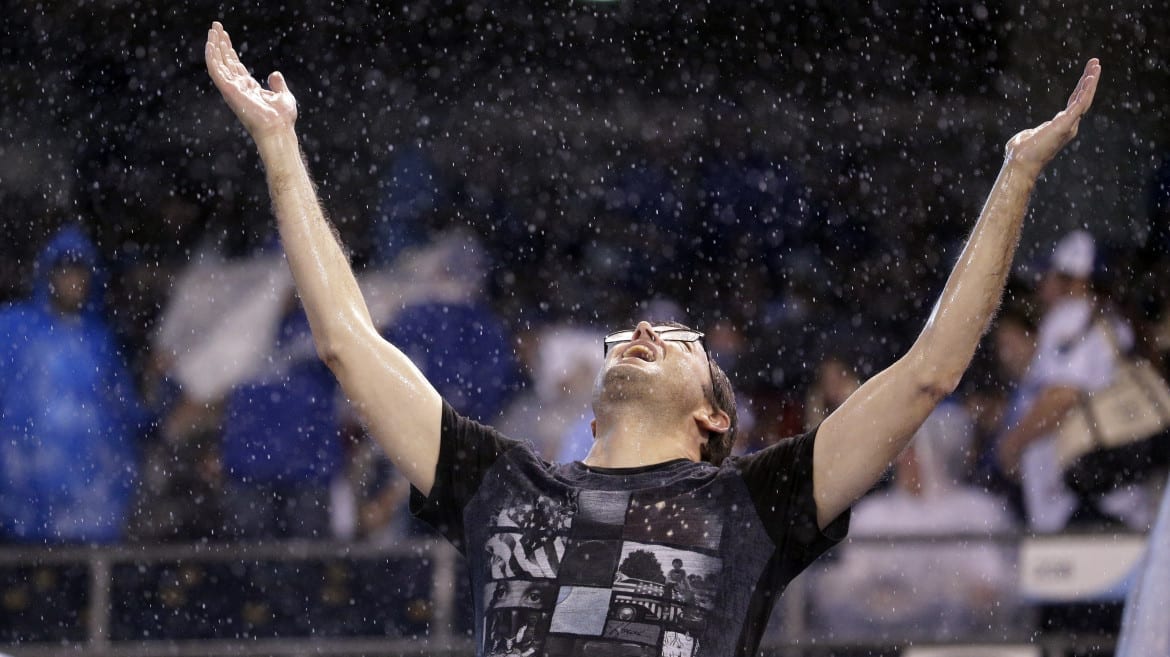 A fan waits out a rain delay in Game 6 of baseball's American League Championship Series between the Kansas City Royals and the Toronto Blue Jays on Friday, Oct. 23, 2015, in Kansas City. (Photo: Charlie Riedel | AP)
Share this story

The Royals’ playoff run was one of the most exciting stories in baseball in recent years. But, of course, the Royals fell 90 feet short of tying Game 7 of the World Series, and had to go home with just a pennant.

I was one of those grouchy people that couldn’t be happy for a while after the game. I took to social media, and posted this kind of bitterness right after the game:

“… This was the shot. We’ll be really lucky to get another one anytime soon ‪#‎depression”

I kind of hate to feed into this narrative, because I think the whole “unfinished business” thing is really over-used in sports. It’s shorthand for: This team is good, but didn’t finish the job last time.

Most of the time it means nothing. But, with this tight-knit team full of young, talented players, I think it’s real.

Even in the regular season, it was evident. If a Royals pitcher would give up two runs in the bottom of an inning, the offense would string together some hits and score three in the top of the next frame.

These guys don’t seem to know: Sometimes you just get beat, and you get to try again the next day. But these Royals never seem to believe they are out of it.

Of course, there are many material reasons this works too: an incredibly strong bullpen, a really deep lineup (one that hits Alex Gordon eighth, for crying out loud). But there’s another thing: a momentum, where guys make a hard turn into first on a routine single simply because, ‘we can do this.’

These guys don’t seem to know: Sometimes you just get beat, and you get to try again the next day. But these Royals never seem to believe they are out of it.

I was in New York City during most of the Royals-Houston Astros ALDS, and was sitting in a bar watching Game 4. It was one of those faux Irish pubs, and a guy from England sat down next to me and started asking me how baseball works. He just had no idea.

For a few innings, I told him about balls and strikes, stealing bases, didn’t get all the way to the infield fly rule. It was cute.

But then when the seventh inning came along, I had to explain why I was getting depressed. I told him they play 162 games before the playoffs even start. He looked at me incredulously.

“Yeah, it’s kind of crazy,” I told him. “They were the best team in the league all year, and they almost won the championship last year, too. But in the end it all comes down to these games, and now the season is over,” I told him.

And I believed it. But this team, somehow, didn’t.

Then, in that miraculous eighth inning, I had to explain again why I was so ecstatic. These are pitchers from the bullpen, I explained, and their whole job is to come in for an inning and not allow more than a run or two. And they rarely do. And it’s usually a low scoring-game, sometimes you might not score five runs in two or three games combined. You rarely do it in one inning. And not when the stakes are this high.

I had to let him know: Baseball’s not usually like this. I didn’t want him signing up for MLB.tv when he goes back to Chester, expecting this kind of excitement year-round.

“This just doesn’t happen,” I said.

But it did. And the Royals repeated the trick a couple times against the Toronto Blue Jays.

They are back in the World Series. And I couldn’t be happier to be eating crow.

Ryan Famuliner is the news director at NPR-affiliate KBIA, and an assistant professor at the Missouri School of Journalism, in Columbia, Missouri.